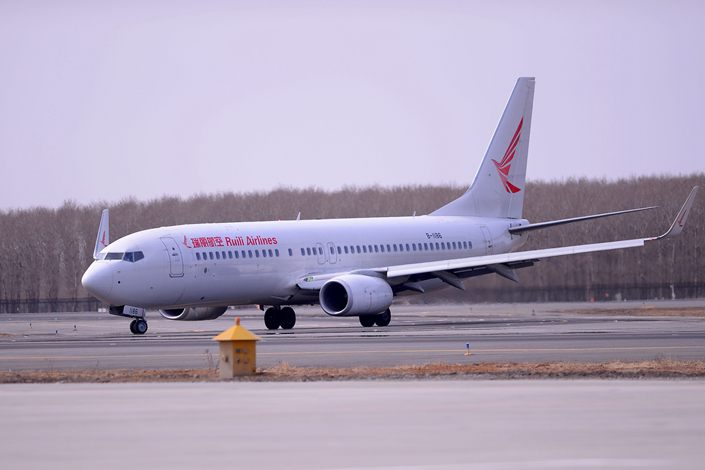 It could also have implications for a Wuxi-backed consortium’s plans to buy the troubled HNA Group’s Hong Kong Airlines, which have reportedly failed to make progress after more than a year of talks.

Wuxi Communications Group, which is wholly owned by the city government of Wuxi, Jiangsu province, bought a controlling 51% of the regional airline, sources told Caixin. The company announced (link in Chinese) the deal Tuesday but did not reveal the quantity it had purchased.

The acquisition agreement is of “special significance” to Wuxi as it seeks to develop an aviation hub, the company said in a statement which noted Wuxi Municipal Party Secretary Huang Qin and the chairman of Jingcheng Group attended a signing ceremony.

The announcement did not reveal the size and offering price of shares in the deal and it remains unclear if it would prompt major other changes in the carrier’s share structure and where it would be based.

Ruili Airlines has been mired in financial trouble amid pandemic headwinds, with its majority shareholder, Jingcheng Group, pledging 360 million yuan ($51.8 million) worth of shares to Bank of Fudian Co. and CATIC International Leasing Co. Ltd. in the period from March to May.

It has also been embroiled in a court case since the start of 2020 after SkyCo International, a carrier-leasing company, sued it over a 5 million yuan debt.

Founded in 2013, Ruili Airlines, based in Kunming, capital of southwestern Yunnan province, is now operating a fleet of 20 aircraft flying 74 routes in a network covering 43 cities in China and overseas.

Under the deal, both sides hope to jointly push Ruili Airlines to file for a public offering in the near future, according to a source close to Wuxi Communications Group. It would combine aviation resources from Kunming and Wuxi to leverage a dual-headquarters arrangement.

The debt pressure mounting on airlines has presented a “perfect window” for the Wuxi government to acquire a private carrier like Ruili, which is desperate for a way out, Lin Zhijie, an analyst from Aviation Think Tank, told Caixin.

He anticipated more asset restructuring soon in the Chinese aviation industry. The sector has lost nearly 40 billion yuan cumulatively in the first quarter, 84.5% of it attributable to airline companies, according to the Civil Aviation Administration of China.

Yet such public-private airline tie-ups could “pose great challenges” for local governments like Wuxi, Yu Zhanfu, a global partner of consultancy firm Roland Berger, told Caixin. Yu said they may be unfamiliar with the complex internal logic of the aviation industry — even before the pandemic reshaped it in ways that are yet to crystalize.