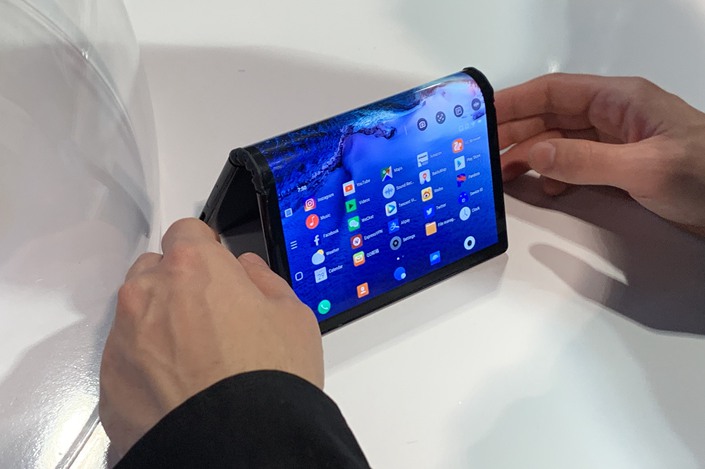 The FlexPai debuts at the Consumer Electronics Show in Las Vegas on Jan. 8, 2019.

Flexible screen pioneer Royole Corp. has signed a pre-listing agreement with Citic Securities Co. Ltd. as it eyes a hometown IPO in Shenzhen, suggesting unconfirmed plans for a $1 billion U.S. listing reported earlier this year may have been put on the back burner.

Headquartered in the southern Chinese boomtown of Shenzhen and Fremont, California, the display-maker has achieved a number of firsts in the niche market for foldable interfaces since it was founded in 2012, including the launch of what is regarded as the world’s first foldable smartphone.

After closing a $300 million series F funding round in May with a valuation of $6 billion, the company has raised a total of $7 billion from investors that include state-backed Shenzhen Capital Group Co. Ltd., sources told Caixin.

The plan to go public comes as hopes run high that foldable displays will become a coveted next generation item, even in the face of concerns about their hardiness, and despite caution from analysts that the already saturated market will make profits hard won.

A handful of digital highfliers like Samsung Electronics Co. Ltd. and Huawei Technologies Co. Ltd. are competing to whet the appetite of consumers, with possible applications including foldable phones, tablets, televisions and display screens in cars.

Royole debuted its first smartphone prototype, called the FlexPai, in 2018. The debut later drew criticism of the cutting-edge technology, with many consumers reviewing it as more fragile than advertised. Critics accused Royole of rushing the product’s launch just so it could be the first to put a foldable phone on the market.

The FlexPai employs Royole’s second-generation flexible display technology to make the phone’s middle section, which allows it to be folded into a dual-screen phone. It is priced at 8,999 yuan ($1,295).

The company says it has the capacity to make 50 million screens a year, even though sources told Caixin that Royole only made 2.8 million in 2019. And the market for smartphone screens isn’t anywhere close to being large enough to justify that kind of output. Less than 1 million foldable smartphones were shipped last year worldwide, according to Sun Yanbiao, head of the N1mobile Research Institute. Sun pointed out that last year Huawei only shipped 100,000 units of its flagship foldable smartphone, the Mate X.

Analysts are skeptical of Royole’s capability to turn a profit with its proprietary technology amid fierce competition. Supplies of the flexible OLED (organic light-emitting diode) displays exceeded market demand by 35% in 2019, according to a report issued by consultancy Sigmaintell that year.

Other than its own line of devices, Royole has teamed up with Chinese telecom equipment maker ZTE Corp. to make flexible smartphones. However, this segment makes up only 0.5% of the global smartphone market, according to statistics analyzed by research firm IDC. Sources said Royole is looking for new clients.

The company is now seeking new applications for its technology to bring in fresh sources of revenue. For example, it is in talks with Airbus Group, the European aerospace giant, to codevelop flexible displays and sensors for the next-generation of aircraft cabins.