In Depth: Residents Pay the Price in Government’s Rush to Demolish Hundreds of Villages by Year End

By Huang Yuxin and Matthew Walsh 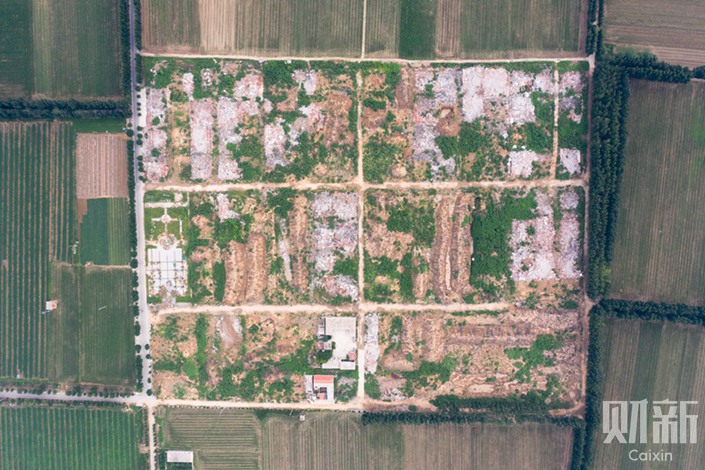 An aerial view after demolition of Housheng village in Shandong province on July 2. Photo: Liang Yingfei/Caixin

In October last year, the 280 or so households of Liumiao village each received a slip of paper ordering them to leave their homes.

Officials in Yanzhou, the city of half a million people that administers Liumiao, were moving ahead with plans to rehouse rural residents in new, semi-urban apartment complexes as part of so-called “village mergers,” a move they claimed would make their lives more convenient and economically productive. Their former homes are slated for demolition.

Such relocations are common in China, where in recent decades the government has uprooted millions of people in the name of economic development, rural revitalization or environmental protection. Although many people see the measures as a rapid path to new property, wealth and urbanity, some have decried what they see as low compensation, coercive official tactics and the destruction of rural communities.

In Shandong, the eastern province where Liumiao is located, authorities claim large numbers of small villages have hindered the development of the countryside. Unlike other provinces, which have tended to string out large-scale relocations over a decade or more, Shandong plans to hurriedly merge more than 250 communities by the end of the year.

The speed and scale of the plan is prompting heavy-handed official action and disrupting lives, as cities across the province frantically bulldoze villages and force residents into unfamiliar accommodation at short notice.

Yanzhou initially planned to transfer people from Liumiao and five other villages into “transitional” housing ahead of a further move into multistory apartments in a nearby township early next year.

But with just a few months to go, work has yet to start on the permanent homes. Meanwhile, some Liumiao residents are crying foul at a government compensation policy they see as unfair, while others wax nostalgic for a hometown they’re reluctant to leave behind.

“We have strong ties to our hometown and don’t want our houses to be demolished,” said Zhu Wei, a middle-aged grain farmer from the village.

Liumiao’s recent history could easily apply to thousands of Chinese villages. Once a thriving rural community, it’s seen an exodus of young people amid the country’s rapid economic development over the last four decades. The 180 or so people who now live there year-round are mostly seniors and young children, according to village secretary Liu Xiyan.

Population decline isn’t the only problem. Liumiao lacks an adequate natural water source, suffers from poor transportation infrastructure and lies at the edge of the jurisdiction of Da’an township, in a location officials describe as undesirable.

In contrast, the planned site for the villagers’ not-yet-built new homes lies opposite the Da’an government headquarters, providing easy access to the township’s amenities.

Liu agreed. “Other villages in the township have already moved out, and people here are jealous,” he said, adding that the village merger “will make it easier for children to go to school and for parents to go out and work, and will improve the villagers’ quality of life.”

Several Liumiao residents interviewed by Caixin backed the merger. “With fewer and fewer people in the village now, there’s nobody to talk to,” said 58-year-old Wang Shilan, who has lived in Liumiao for 33 years.

Some families had already bought apartments in Da’an to enroll their children in local schools, said 42-year-old farmer Zhou Guangjun, adding: “We should move as soon as possible.”

But others were less supportive. Zhu, the grain farmer, estimated that 30% to 40% of villagers in Liumiao are too old or weak to live comfortably in the planned walk-up multistory apartment blocks, but have accepted the move in a gesture of support to their younger relatives.

Others went along with the plans because officials promised to pay over the odds for their village homes, Zhu added. “When you offer 100,000 yuan for houses that normally sell for 20,000 or 30,000 yuan … of course they’ll take it.”

Despite promises of bumper payouts, many Liumiao residents are unhappy with the government’s compensation scheme.

Under the terms of the October notice, village households that accepted the government’s reparation package before Nov. 30 would receive a “demolition fee” of 10,000 yuan, a bonus of 5,000 yuan, a one-off relocation payment of 1,000 yuan and a monthly stipend of 600 yuan during the 18-month transition period — a total of 26,800 yuan.

Those who reached an agreement after Nov. 30 would not receive the bonus and would only receive the stipend from the date they left the village, the notice said. Residents had little room to negotiate the settlement.

Some Liumiao residents told Caixin the government’s one-size-fits-all standards for reimbursement ignored differences in living conditions. “How is the compensation defined?” said villager Zhou Lin. “Are the falling-down mud-brick houses worth as much as the larger, newer bungalows?”

Additionally, the notice does not make clear how much villagers will have to pay for the permanent apartments or where they will live if the homes have not been built by the end of the transition period — something that now looks increasingly likely.

If the construction project falls through, several residents said the reparations would leave them struggling to buy apartments in Da’an, where large, roomy homes sell for around 1,200 yuan per meter, far more than the Liumiao average, according to villager Zhu Guangshun.

“The compensation is too low. Regular folks can’t get their money’s worth,” said Zhu Guangshun. “If they’ve got to then cough up 100,000 yuan or so for a house, they’re just going to end up poorer.”

“Unless they give us new houses of exactly the same size as the old ones, or about 200,000 yuan [extra], I’ll struggle to pay back the mortgage on a house in the city,” said villager Zhou Qiang.

Huang, the Da’an Party committee secretary, said the government has already drawn up plans and a budget for the project, and is currently opening it for tender.

He added it was impossible for the government to offer all villagers new accommodation on the terms they requested.

“This project is paid for out of the township’s finances. The cost [of the new apartments] is more than 2,000 yuan per square meter,” he said. “The geographical conditions differ between the village and the town, so it’s not possible to offer compensation in return for new housing of an equivalent size.”

Shandong’s village merger program gained national attention last month following the publication of a viral article co-authored by He Xuefeng, a professor at Wuhan University in charge of a research center on China’s rural governance, detailing examples of poor planning and government overreach.

“The key thing is how to guarantee the rights and interests of those who don’t want to move,” He said in an interview with Caixin.

He added that he worried some rural residents would move into new accommodation without fully understanding the policy, potentially exposing them to financial uncertainty farther down the line.

Arguing that Shandong’s village mergers carried “systemic risks,” He’s article said the scheme risked “passively dispossessing” rural residents by destroying their former homes while forcing them to commute from Da’an to the fields they still tend.

The piece also contended that the mergers are destroying farmers’ private interests and state-built rural infrastructure, wasting vast sums of money and contradicting the government’s own targets for green development.

Other scholars have also studied the senses of dispossession and dislocation felt by many of China’s relocated rural villagers.

Hu Jing, the director of a research institute studying agricultural policy and urbanization at South China Normal University, previously described how Chinese villagers who move with their families to the cities for work often try to return to the countryside if they feel unsupported by urban systems of employment and social security.

The behavior reflects the feeling of being pulled toward both the city and the countryside without fully belonging in either — a sense of planting “each foot on a separate boat” as the vessels drift apart, Hu wrote.