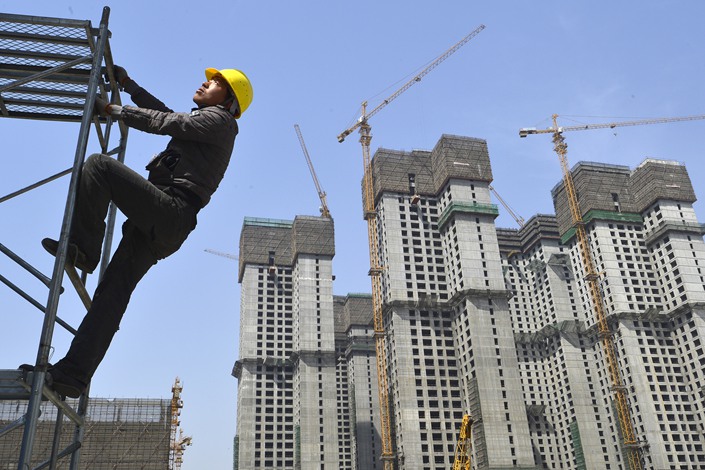 Construction in progress at a housing project in Taiyuan, capital of North China's Shanxi province, July 17.

Amid a once-in-a-century pandemic, it’s valuable to look back on another economic crisis in 1998 and see how China coped as it offers a glimpse of where China will head after this current crisis.

Faced with internal and external crises that hit both the financial sector and the real economy in 1998, the Chinese government played a poor hand well and turned crisis into an opportunity. If it had taken a different response, we’d be living in a different China.

In July 1997, Thailand was the first to see the depreciation of its currency, the baht. As the currency crisis spread rapidly around the region, many Asian countries watched their currencies depreciate in the second half of 1997. While the Chinese yuan stayed firm at the time, it was widely estimated that China’s economy would slow significantly or even slide into recession the next year, with the yuan depreciating sharply.

Under such circumstances, the Chinese government stated in March 1998 (link in Chinese) that it would keep the yuan’s exchange rate stable and achieve an annual economic growth rate of 8%. This was quite a challenge back then because China’s domestic demand wasn’t strong enough to support rapid economic growth on its own, and the labor force was growing so fast that finding a job was difficult.

This year, the fallout from Covid-19 and growing animosity between China and the U.S. pose a similar challenge to the Asian financial crisis in 1997 and 1998. But due to China’s development in recent years, there shouldn’t be as much damage.

First of all, China’s labor force has shrunk over the past few years. Limited data show that domestic unemployment is not as serious as it was in 1998. That year, a great share of the labor force worked for inefficient state-owned enterprises, leaving many workers at risk of falling into the ranks of the unemployed. This, together with the economic slowdown, led to severe unemployment at the time.

What’s more, the Chinese government’s ability to regulate the economy was much weaker than it is today. Neither overseas investors nor Chinese mainland businessmen were confident that the government would succeed in dealing with the crisis. However, since 2008, there is a lot more confidence both at home and abroad that the Chinese government can maintain steady economic growth, which in turn makes its economic stimulus policies more likely to work.

Finally, China’s annual GDP was about $1 trillion in 1998, not even in the ballpark of today’s $14 trillion-plus. Back then, China’s economy was mainly driven by investment and exports, both of which were hit hard by the Asian financial crisis. Today, China’s domestic demand is much larger, providing a cushion against an economic slowdown.

Despite the thornier challenges of 1998, the Chinese government pushed through several major reforms in the following years that fundamentally changed China, including encouraging the private sector and joining the World Trade Organization (WTO) to open the domestic market. The latter might have been the most crucial step. Since it joined the WTO, China has become much more entrenched in global supply chains, had made great advances in industrial technology and has cultivated a large number of modern managers.

With its economy on more solid footing than 22 years ago, China now faces a much less dire situation. After going through the challenges of 2020, it remains to be seen whether China will become more inward-looking and where its relationships with developed economies might end up.