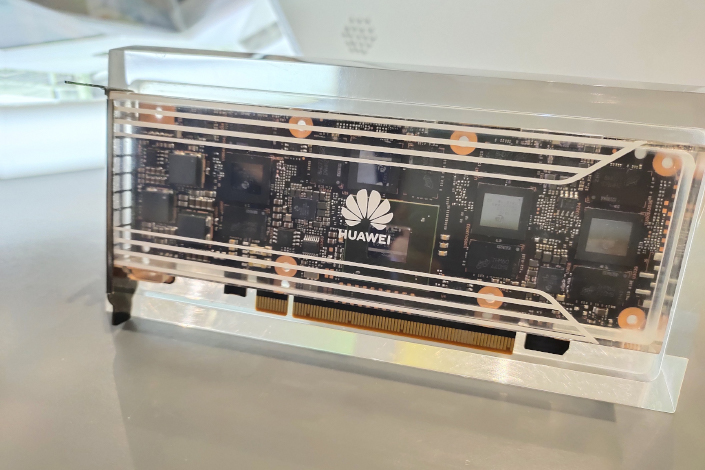 A Huawei chip sits on display at its headquarters in Shenzhen in 2019.

Chinese tech giant Huawei Technologies Co. Ltd. has made a foray into a new line of business making so-called display driver integrated circuits (DDICs), Caixin has learned, to improve the display image performance of its products.

The move is the latest example of China’s attempts to climb the value chain in the global semiconductor industry, where its companies are still playing catch-up with foreign competitors.

The market for DDICs, the key component behind the quality of display panels that form the backbone of modern electronic products, is dominated by two South Korea-based manufacturers — Samsung Display Co. Ltd. and MagnaChip Semiconductor Corp. — which together had an 89% global share in the first quarter of 2019, according to research firm IHS Markit.

Unlike its larger rival Samsung, which has built up its own panel display business, Huawei currently relies on third-party companies to supply its DDICs and display panels for electronic products.

Huawei’s DDIC ambitions recently attracted much attention after the company reportedly set up a new unit dedicated to development of the business. Media reports revealed that Yu Chengdong, the head of Huawei’s consumer business, approved a plan on July 28 for the strategy to involve several departments, including engineering and product development. An inside source at Huawei confirmed the move with Caixin.

By entering the DDIC market, Huawei aims to improve the competitiveness of its end-user consumer products, said Gu Wenjun, a semiconductor analyst at Shanghai-based research firm ICWise. Huawei can better compete with Samsung if it can design better DDICs to differentiate its consumer products from those of the South Korean company, Gu said.

Huawei and Samsung are currently the world’s two largest smartphone vendors, responsible for a combined 40% of new handset shipments in the second quarter of this year, according to data from multiple research firms.

The fact that Samsung is also a leader in display panel technology has given the South Korean company an edge that led some consumers to choose a Samsung phone instead of a Huawei product.

This month, Samsung launched its Galaxy Note20 series of phones equipped with panel displays with adaptive frequency topping 129 hertz (Hz). That’s compared with 90 Hz for Huawei’s similar P40 phone which was rolled out in March.

Huawei’s gap in presented image performance is largely because Samsung is one of the few companies that has mastered the technology at that level, and also reserved it for its own use.

ICWise’s Gu expects Huawei’s DDIC business to become involved only in chip design, with manufacturing being outsourced to other companies. He said Huawei is likely to choose local semiconductor companies, like Semiconductor Manufacturing International Corp., to do the manufacturing.

However, there is still uncertainty about the reliability of firms like SMIC to help Huawei make the chips because the ongoing U.S. government technology export sanctions also target those companies, he said.

Although China has made progress over the years in making panel displays, with companies like BOE Technology Group Co. Ltd. now among the leading players in the sector, they still heavily rely on foreign firms to supply DDICs.