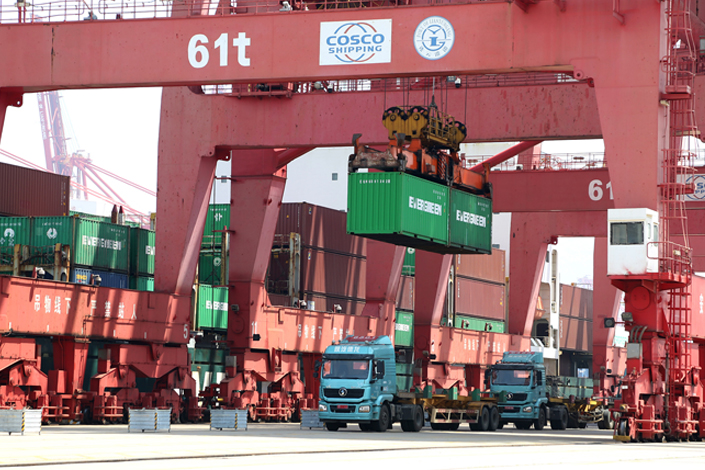 Ocean shipping rates between China and the U.S. have soared in the last three months as Chinese exporters and their American customers race to stock up on goods over concerns about potential new tariffs during a season that is already one of the industry’s busiest.

While China’s exports to the European Union and Japan both fell in July, the figure for the U.S. rose 12.5% for the month, up sharply from June, according to Chinese customs data. As those exports swelled, container freight rates on China-U.S. routes rose sharply and are now more than double what they were at this time last year.

The price for shipping a 40-foot container to the West Coast of the U.S. has now passed $3,100, while shipments to the East Coast now cost more than $3,500, according to the Shanghai Containerized Freight Index (SCFI). Both rates are up nearly 90% over the last three months alone.

“This past month I’ve been busy sorting through schedules of container shipping lines headed for the U.S., and nearly all are booked solid. The soonest I can book is for three weeks from now, and customers are paying a handsome premium to move their goods,” one agent specializing in U.S. shipping routes told Caixin on Thursday.

The agent said the third and fourth quarters are already a high-season for shipping on China-U.S. routes, and U.S. retailers are one of the most active groups driving the current high demand. At the same time, shipping companies are increasingly running short on containers and offering fewer empty containers than usual on arrival in ports, also leading to tight supplies.

The spiking demand also reflects the current tense state of U.S.-China relations, said Zhu Pengzhou, an analyst at the Shanghai Shipping Exchange. “This behavior is a type of ‘overdraft’ against (limitations on) future shipping volumes and general nervousness,” he said.

Many exporters may be racing to ship their goods to the U.S. over concerns about the potential for the administration of U.S. President Donald Trump to reimpose tariffs that were rolled back or delayed after the two sides signed a “phase one” trade deal early this year, he said. Shippers may also be worried about the potential for new tariffs amid a recent increase in tensions, he added. Trump has been ratcheting up those tensions with more frequent and aggressive moves against China in the run-up to the U.S. presidential election in November.

One exporter in the Eastern China coastal city of Wenzhou said his U.S. customers are worried about the potential for such new tariffs and are pushing his company to speed up its deliveries. “We’re working overtime every day to boost production,” he said.

Zhu added that the frenzy of booking is also being prompted by shipping capacity that is genuinely lower than usual due to cutbacks made during the pandemic. Like many other companies, shippers affected by the pandemic have cut capacity, with the percentage of idled ships reaching all-time highs in the second quarter. And while China has largely brought its outbreak under control and reopened most of its economy, including ports, many parts of the U.S. remain under various stages of lockdown as it tries to bring its own epidemic under control.

Chinese regulators have taken notice of the spike in rates. On Monday, the ocean shipping section of the Ministry of Transport sent a note to six of the world’s top shipping lines, including domestic giant Cosco Shipping Holding Co. Ltd. and Danish giant Maersk, asking for more information on the situation. The request also asked the companies to provide information on their recent pricing for routes between China and both the U.S. and Europe, and explanations and their own analysis on the reasons for the spike.