Trending in China: Too Fat to Order That Dish? The Restaurant That Weighs You Before You Order 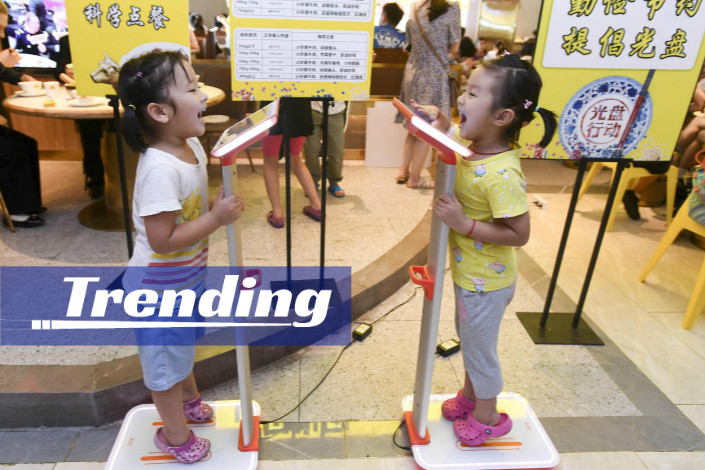 Chuiyan Fried Beef, a chain of restaurants in central China’s Changsha, caused a massive stir when it joined the latest “anti-food waste” fray on Wednesday with the installation of weighing scales linked to a digital menu in one of the Hunan chain’s restaurants last week.

The local chain said it intended to be at the forefront of the Hunanese restaurant sector’s support of Xi Jinping’s recent campaign to minimalize food waste, a big problem in a populous country that imports an estimated 20% of its grain, and has faced floods that have damaged up to 6,000 hectares (14,826 acres) of farmland this summer.

Following public uproar, the restaurant took to Weibo Saturday to defend its marketing campaign, which some commentators have called a malicious gimmick, apologizing for being “unable to contribute to the national food waste campaign as intended,” and regretting having “redirected public resources” toward the endeavor. The restaurant said it would continue to offer ordering by weight, and thanked the thousand-plus diners who had stepped up (on the scales) so far. The general manager of the chain insisted that data remained on individual diners’ phones and would not be stored by the company.

The latest public health campaign has seen cities across China vying to display their frugal sides. Wuhan has rolled out N-1 dining, while Liaoning has gone further with N-2 dining – the numbers referring to dishes ordered being less than diners present, an imported practice from Singapore and Southeast Asia.

According to a report (link in Chinese) by the Chinese Academy of Sciences and its international partner WWF, restaurants in the country let up to 18 million tons of food go to waste every year, enough to feed 50 million people.

The anti-food waste campaign has perhaps been made possible by this summer’s first post-Covid-19 public health campaign – waste separation – which has seen restaurants fined for not disposing on their waste correctly, and the public encouraged to participate in the campaign by following complex diagrams showing how they should separate their waste into color-coded bins at home or in their residential compound.

Thousands of people liked the comment, “this restaurant has earned eyeballs, but lost the hearts of the people. Regular people won’t like this, no matter what they weigh.” Others questioned the science of the marketing campaign, agreeing with the commentator who wrote, “It’s not necessarily science to draw a straight line from how much you eat to what you weigh. I know some skinny people who eat a huge amount.” Netizens were also puzzled as to why the restaurant had to apologize: “I don’t get it. If you don’t like it, you don’t need to eat there. If you are OK with it, try it out. I don’t think it hurts anyone, but forcing the restaurant to apologize sits badly — what’s wrong with society?”

Even the apology failed to hit its mark with some who felt it was a poor marketing follow up. “I don’t think the store has got the point of apologizing. People are not taking offense at “redirecting public resources.” You need to address the actual issue.”