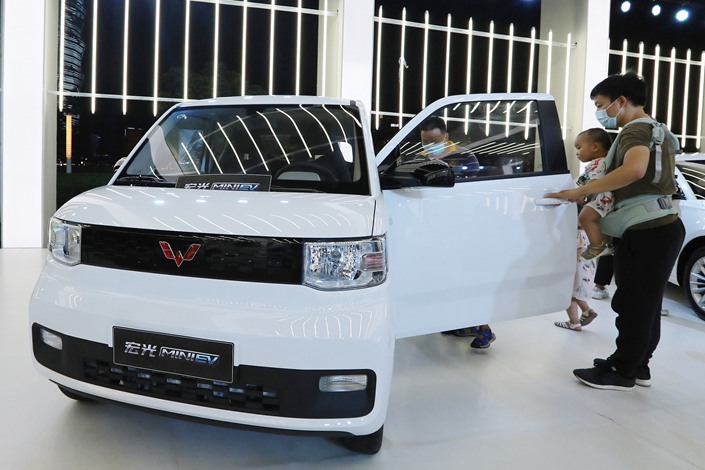 For years they have lived in China’s regulatory shadows, not considered true cars but also significantly larger and faster than motorcycles or other motorized vehicles like scooters or mini delivery trucks.

Now the type of vehicle known to industry people as the “quadricycle” is getting a major boost of validation in the world’s largest auto market with the recent launch of a model from one of U.S. giant General Motors Co.’s local joint ventures. The more compact, lower-priced category of vehicles is already popular in China, especially in less affluent rural areas, despite operating in a gray area that lacks formal government recognition.

The GM joint venture, known officially as SGMW and locally as Wuling, sold 15,000 Mini EVs in the first 20 days of going on sale, the joint venture announced.

Such cars are also popular in Europe, where streets are often much narrower than other parts of the world. In China they have grown in popularity in the last decade, especially in smaller, less developed areas where the cost of a conventional vehicle can be probative.

But their existence in a regulatory gray zone means people who buy them can’t get license plates and don’t need drivers licenses to operate them — factors that make them at once attractive but also risky if they become prohibited or restricted in the future. Sales of such vehicles grew at a hefty 66% each year on average between 2011 and 2017, with the annual total reaching about 1.3 million in 2017, according to an article citing Chen Qingtai, head of China EV100, a group of academics, administrators and others following the electric-vehicle sector.

The Mini EV’s initial strong demand may be fueled by its positioning as a relatively high quality product from a well-known name at an affordable price. Its potential to become a breakaway success comes as no surprise, said Gu Zhihong, vice president of rival mini-vehicle maker Fulu Group.

“Like QQ and Alto before it, the Mini EV will become a means of transportation for many lower-tier cities and villages, the first car for young people or the second car for families,” he said, referencing two earlier mini-cars that also enjoyed strong demand.

Beijing has aggressively promoted new energy vehicles over the last decade, in an effort to clean up the country’s polluted air and develop technologies that can be exported. But much of the support over the last five years has gone to more traditional larger cars, benefitting global names like Tesla Inc. and homegrown players like BYD Co. Ltd..

That has left the quadricycle-makers to fend for themselves, making them much more market-oriented and self-sufficient. That has given them a leg up on the many larger EV makers that are now getting squeezed following sharp cutbacks in government subsidies over the last few years.

The GM joint venture’s move could be partly the result of recent positive signals coming from the EV industry regulator, which is encouraging new-energy carmakers to pursue more sales in less affluent smaller cities and villages, industry observers told Caixin. In that regard, SGMW’s Mini EV launch could be a ground-breaking step that others could soon follow, they added.

If the GM joint venture is any indicator, demand for the vehicle type is strong. SGMW says it has already received orders for nearly 50,000. The strong reception has led the China Passengers Car Association to predict the Mini EV will be one of two “champion” cars of the year, alongside Tesla’s more traditional Model 3 that has seen strong growth since it began production at a local factory in Shanghai. In anticipation of the strong demand, SGMW is raising capacity to make 20,000 Mini EVs per month.

Going forward, a key factor for the industry will be how it is ultimately classified. The industry has its fingers crossed that quadricycles will be designated as motorcycles rather than as cars because more stringent licensing procedures and manufacturing requirements for cars could wipe out many smaller players.