By Ingrid Luan and Wang Heyan 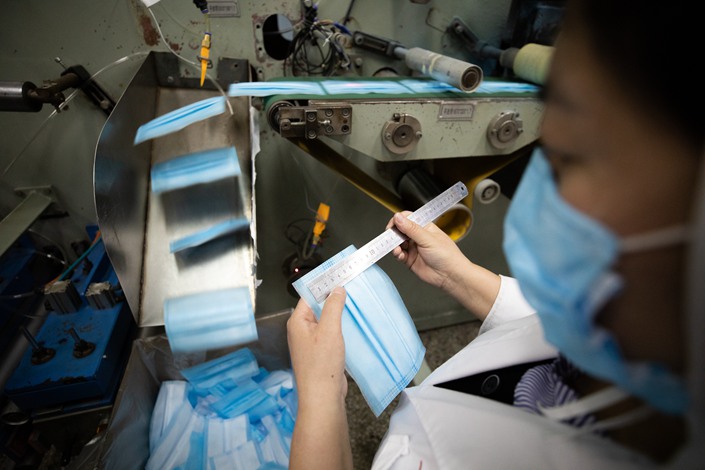 Counterfeit face masks are rapidly becoming a thing of the past in China, as prices for the genuine article plunge due to a huge supply glut after companies flooded into the business. But that’s likely little comfort for Li Dong, the boss of a big pharmacy chain, who will be spending the next 15 years in prison for making $610,000 peddling phony 3M masks at the peak of demand.

The 37-year-old who founded Beijing Jinghai Kangbaixin Medicine Co. Ltd. in 2004 had his life turned upside down when he was convicted in June of selling over 580,000 counterfeit or inferior masks at an exorbitant price to illegally profiteer amid the heightened epidemic in January.

That month, demand for face masks was skyrocketing as the coronavirus swept the country and quickly turned the industry to a seller’s market, where counterfeit and substandard products soon began appearing. At the time, many factories quickly retooled and began cranking out medical equipment, from face masks to protective clothing, which they sold both at home and abroad.

Quality problems quickly emerged with many products, leading some countries to accuse China of deliberately selling them substandard products. At the same time, even less scrupulous companies attempted to dupe buyers with counterfeit products, a major problem in China.

Li was one such vendor, taking advantage of the well-respected 3M name to peddle his products. Within four days, he made 4.25 million yuan ($610,000) in sales and earned a net profit of 2.7 million yuan by selling counterfeits to the anxious public.

The three defendants have all appealed, claiming that they believed the masks to be genuine branded products and had been tricked into purchasing them by a supplier that provided false quality certifications. They were fined a combined 9.5 million yuan.

Kangbaixin Medicine is a Beijing-based pharmacy chain with about 60 outlets. In May 2018, Cowell Health, a subsidiary of global investment conglomerate Hillhouse Capital Management Ltd., became the controlling shareholder of the firm with a 51% stake, according to company data provider Tianyancha.

The high-profile case came to light when Beijing police took Li Dong and his assistants into custody in late January and early February. Before then, the market watchdog had confiscated 24,000 fake or substandard masks at the chain’s drugstores in response to consumer complaints. 3M Co. also identified the masks as counterfeit.

On Feb. 10, China’s Supreme People’s Court (SPC), Supreme People’s Procuratorate (SPP) and two government departments issued a new rule (link in Chinese) criminalizing the sale of counterfeit or substandard personal protective equipment (PPE) as it could hinder the containment of the epidemic.

Several weeks later, district prosecutors in Beijing charged Li and his codefendants with selling substandard products. The court announced the case to the public in March and announced the verdict on June 19.

According to the verdict, Li Dong, enticed by the money he could make selling masks during the growing epidemic, dispatched his cousin Li Yuzhang, who worked at Sinopharm Group Co. Ltd., to find a supplier. The one he found later provided them with masks with forged 3M branding and certificates of authenticity for 1 yuan to 2 yuan each.

Li Dong went on to sell the masks to wholesalers and pharmacies in Beijing, the neighboring city of Tianjin and nearby Hebei province for 6.5 yuan to 12 yuan each after he personally inspected them. The court concluded that Li Dong intended to flood the market with counterfeit masks because he was experienced enough that he should have noticed their substandard quality.

However, the court deemed Li Yuzhang and Luo Hanyi as mere accomplices “considering their position and role in the crime,” and mitigated their punishments. In total, they got kickbacks of 605,800 yuan from the supplier, Yi Xinyu, which Li Dong was not informed about.

Yi, the 26-year-old who provided the masks to Kangbaixin, has also been tried for buying counterfeit 3M masks and reselling them at a hefty markup, making up to 1.47 million yuan in total. But no verdict has yet been made public for that case.

What did he know?

Did Li Dong knowingly sell the counterfeit goods? While the court determined he did, Li’s lawyer Xu Ping told Caixin that he was tricked by his cousin, who didn’t tell him the source of the masks until after they were caught. Li Dong did check the quality inspection report for the masks. He also told his drugstores to remove the masks from the shelves just two days after hearing complaints, which was before local authorities launched their investigation.

But the court ruled that Li Dong did not do his due diligence when he purchased the masks, concluding that if customers could figure out that the masks were counterfeit, then he certainly knew.

It is possible that Li Dong could clear himself of the selling counterfeits charge if he can prove he hadn’t known the masks were bogus. Jiang Qibo, director of the SPC’s Research Office and his counterpart in the SPP, Gao Jingfeng, told the press (link in Chinese) on March 24 that merchants whose suppliers trick them into buying counterfeit masks should not be criminally liable for selling them.

But the judicial officials also pointed out that defendants would be considered to have acted deliberately if they bought masks from unusual sources at well below market prices. Li Dong admitted that his drugstore chain hadn’t bought masks at such low prices through normal channels before the Covid-19 epidemic.

He also departed from Kangbaixin’s usual procurement procedures when he asked his cousin to go find a mask supplier. In the early days of China’s epidemic in late January, most of the company’s staff had already left for the Lunar New Year holiday, so Li Dong was unable to follow normal procedure, his lawyer said.

The court, however, saw this as little more than an excuse, as Li Dong took a big risk by disregarding the company’s purchasing and quality control procedures.

Kangbaixin issued a statement on Feb. 28 apologizing for selling counterfeit goods and offered refunds of three times the purchase price to any customer who bought the masks in late January.

However, it was also not the first time the company had been punished for profiteering on masks. In January, Beijing’s market regulator fined Kangbaixin 100,000 yuan for selling antipollution masks at a 160% markup.

China has ramped up its crackdown on companies producing or selling counterfeit masks since the epidemic caused demand to surge. Gan Lin, deputy head of the State Administration for Market Regulation, said at a press conference in April that market regulators had seized nearly 90 million faulty face masks and 418,000 other defective PPE items as of April 24.