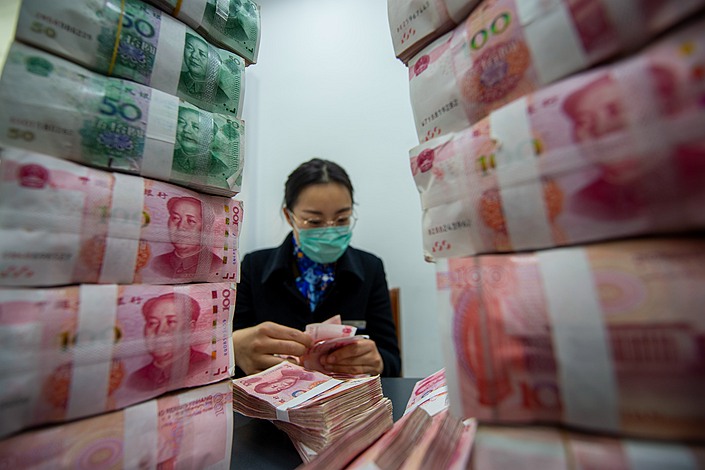 Local governments around China want to bring high-interest, short-term debt onto the books by swapping it for longer-term bonds.

Several local governments are trying to win approval to swap their off-balance-sheet debts into bonds to save on financing costs, as China faces mounting debt risks following the outbreak of Covid-19.

The Ministry of Finance began a large-scale debt swap campaign in 2015, originally slated to run for about three years, aiming to transform 14.34 trillion yuan ($2.1 trillion) of hidden local government debt into bonds on the books in a bid to cut financing costs and reduce financial risks. The campaign continued into last year due to unfinished tasks.

In recent months, several local governments in North China’s Inner Mongolia autonomous region, as well as Southwest China’s Guizhou and Sichuan provinces, have said they will apply for debt swap quotas this year.

This year’s swaps will likely begin in the fourth quarter, although the amount of the quota to be distributed remains unclear, sources familiar with the matter told Caixin. Applicants will face screenings from at least their provincial government and the finance ministry, which will evaluate their debt swap plans, the sources said.

Local governments are generally able to lower interest rates by swapping debt. From 2015 to 2018, the debt swap campaign saved Chinese local governments a total of 1.7 trillion yuan in interest payments, according to a report (link in Chinese) released by the National Bureau of Statistics.

Local governments’ hidden debts include money that they borrow via financing vehicles, which they provide implicit guarantees for or promise to repay with fiscal revenues. Over the past few years, local governments have aggressively sought funds to boost investment, resorting to high-cost borrowing.

The exact scale of local governments’ off-balance-sheet debt is not clear. Li Qilin, chief economist of Lianxun Securities Co. Ltd., said (link in Chinese) the value of outstanding hidden local government debts could have been 37 trillion yuan at the end of 2018.

Debt risks are rising for local governments as they struggle to make ends meet amid the economic impact of the pandemic. Meanwhile, Beijing has required them to boost spending to support the economy. Data from the Ministry of Finance show (link in Chinese) that local governments’ fiscal revenues fell 6.2% year-on-year in the first seven months.