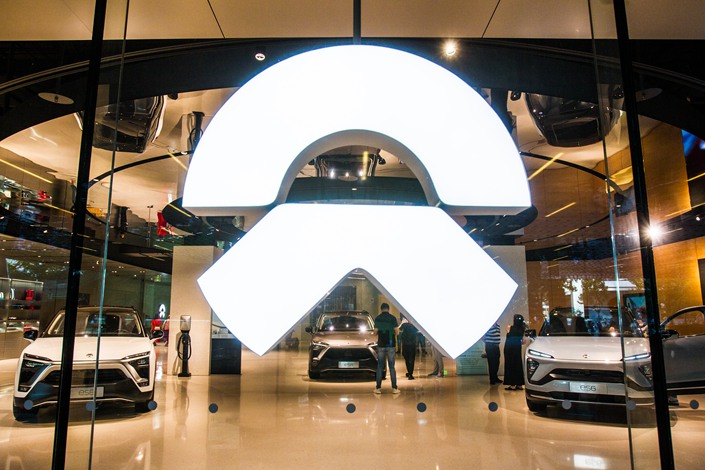 Electric-vehicle maker Nio has set up a subsidiary that will be in charge of handling its battery assets.

Chinese electric-vehicle maker Nio Inc. is launching a battery rental business that will allow its cars to be purchased without a battery pack in an effort to make its vehicles more affordable.

The business, called “Battery as a Service,” can lower the down payment on battery-less Nio models by as much as 70,000 yuan ($10,115), according to Nio CEO William Li.

The battery rental service starts at a price of 980 yuan a month.

The central government has already approved the sale of electric vehicles without batteries. On July 22, the Ministry of Industry and Information Technology acknowledged that two models of the Nio EC6 have been registered as vehicles without a specified battery type, and can be delivered to customers starting in September.

On Tuesday, the company set up a subsidiary with 800 million yuan in registered capital in Wuhan that will be in charge of handling its battery assets. Four shareholders — battery-maker Contemporary Amperex Technology Co. Ltd. (CATL), securities firm Guotai Junan International Holdings Ltd, Hubei Science Technology Investment Group Co. Ltd, and Nio – each own a quarter of the new company.

Li said he expects more shareholders to join in the future.

As of May this year, Nio had 131 battery-swap stations across 58 cities in China. Li said he sees the subsidiary eventually running a platform that drivers can use to swap batteries in other brands’ electric vehicles as well.

Several other companies including Botan Technology and Softbank-invested Aulton also provide such battery swap services. However, China has not issued a policy that standardizes battery pack specifications so that the same one can be used across a range of vehicles.