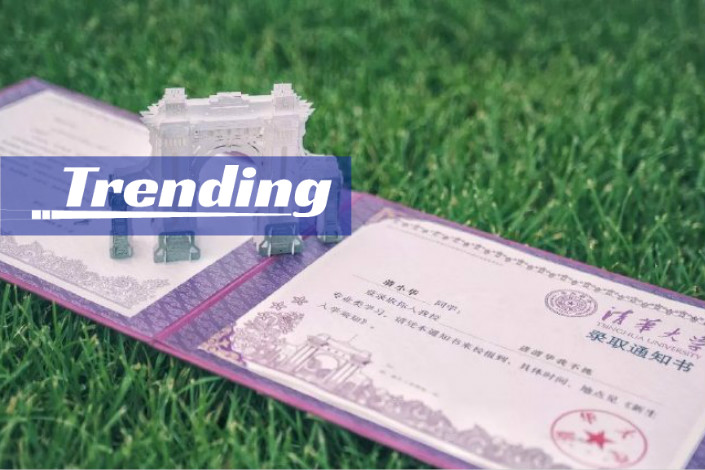 In an attempt to fool his parents after the release of college entrance exam results, a high school graduate in Guangdong bought a fake admission letter for Tsinghua University, one of the top universities the country. After his scheme backfired and made headlines last week, online vendors who sell fabricated certificates found themselves under heightened scrutiny from regulators and e-commerce giants.

The student surnamed Cao scored 235 points out of 750 in this year’s college entrance exam, but told his parents that he scored 702 and was accepted into the artificial intelligence major at Tsinghua University. Cao’s family and entire village celebrated his “achievement” until a local official discovered the lie through a misplaced Chinese character on the fake acceptance letter. The local police said that Cao has acknowledged his mistake and did not have criminal intentions, so would likely receive only a verbal warning.

According to thePaper.cn, fabricated college admission packages that range from vocational training to graduate degrees are available on e-commerce site Taobao and secondhand platform Xianyu for as little as 200 yuan ($29), complete with fake ID numbers, school official signatures, and seals. After Cao’s case directed the nation’s attention to the counterfeit industry, keywords such as “admission letter” have been blocked from sites including Taobao, Xianyu, JD.com, and Pinduoduo, while some merchants have shifted their businesses over to messaging platforms such as WeChat and QQ to avoid detection.

According to China’s Public Security Administration Punishments Law, people who fabricate certificates and seals can be detained for 5 to 15 days and fined up to 1,000 yuan ($145). The internet security department of Alibaba, which owns Taobao, issued a statement on Thursday promising to step up its regulation of fake certificates and encouraging buyers to report counterfeits.

While Cao’s story has occupied headlines over the past few days, netizens have urged the media to stop putting undue pressure on the student and focus on the counterfeit industry instead. “The student made a very foolish mistake but we should forgive him. What we shouldn’t forgive are the sellers that make such purchases possible.”

Many people point out that plenty of Taobao shops thrive on similarly illegal businesses, including fabricated medical records, pinhole cameras for spying purposes, and facial recognition data. In the comments below Alibaba’s statement on Weibo, people have called for the company to regulate these sellers as well. One of the top posts reads, “Where was your commitment to combating fraud before Cao’s case started trending?”