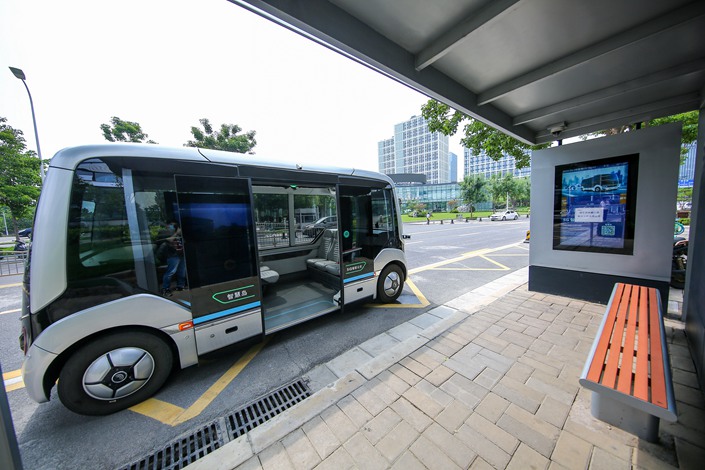 A self-driving bus in Zhengzhou, Henan province, on Aug. 11.

As a year-end deadline looms for China to achieve its three-year plan to commercialize a technology that enables cars to drive themselves, an industry think tank leader has warned the country is far from meeting its ambitious goal.

Zhang Yongwei, general secretary of state-affiliated industry association China EV100, said at its annual forum on Saturday that multiple issues have been exposed in the development of 5G-V2X vehicle wireless communication technology which can connect a car to anything on the fifth generation network.

The technology was included by the Ministry of Industry and Information Technology in a three-year plan launched in 2018, and was expected to be commercialized in unspecified parts of the country this year.

The plan, however, lacked explicit top-level design, making it difficult for different parties — including the carmakers, equipment vendors and cloud-services providers — to coordinate, said Zhang. That had led to a chaotic situation, with each side wanting a bigger investment share.

“They just blindly went into this field aiming to secure a spot in it,” another industry insider told Caixin.

But with all the issues unresolved, making progress is “very difficult,” Zhang added. Many of those involved have prioritized building the necessary manufacturing infrastructure and neglected the related operational problems. So, the new facilities have been left idle, the industry insider said.

“There were few companies that engage in self-driving technology moving in,” the insider said, adding that “government can do very little to solve the problem.” He added this kind of scenario is quite prevalent in this field.

Also, different government bodies don’t share data with each other. A lack of access to cameras controlled by different authorities has to some degree hampered development of the self-driving project, the person said.