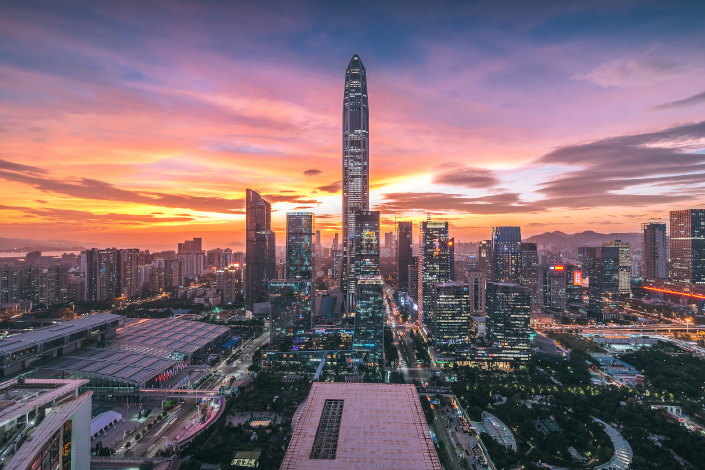 The Pingan International Financial Center in Shenzhen in 2018.

This month, the Shenzhen Special Economic Zone will celebrate its 40th birthday. In that time, Shenzhen has gone from a provincial backwater to one of China’s richest first-tier cities, increasing its GDP from a mere 200 million yuan in 1980 to nearly 2.7 trillion yuan last year.

Shenzhen is a true pioneer of Chinese reform and opening, and also its best example. Looking back on the last 40 years, the southern Chinese city’s progressiveness has acted as a kind of mirror reflecting the path of China’s systemic transformation and the highs and lows of regional development. In a new historical period, Shenzhen remains a bastion of home, while simultaneously facing all sorts of massive challenges.

To start with, the “special” in “special economic zone” mainly lies in its policy advantages. Deng Xiaoping’s famous exhortation that “China has no money, so you must go make some — cut open a vein to let it in” gave Shenzhen that authority. That advantage gradually diminished in subsequent years as other parts of China also opened up, but Shenzhen was still able to retain stable, sustainable growth, showing that its success did not just come down to particular policies, but also to its own merits.

A clear thread runs through Shenzhen’s history. The city has always done its utmost to grant more autonomy to market entities, as seen in the way the economic zone’s establishment initially broke though significant obstacles, in Deng’s call to accelerate its development during his famous 1992 southern tour, in the zone’s transformation and upgrade during the 21st century, and in its respect for business and workers.

Thanks to meticulous government support, Shenzhen has created a relatively hands-off, free and fair business environment, and become a fertile ground for innovation. The city’s experience of managing the relationships between private enterprise and the state has been key to its rise, and it provides the most salient lessons for other places in China.

Within that framework, businesses are the main protagonists, while the government acts as an overall guide. Not only do world-class businesses set up headquarters in Shenzhen, but so do any number of vibrant micro, small and midsize ones.

In local government terms, Shenzhen was one of the earliest places to embrace limits on state reach and a service-oriented mentality. Although the city’s model still has many shortcomings, it remains one of China’s most progressive. In recent years, the Shenzhen municipal government has adopted an attitude of simplifying all tasks that businesses and individual citizens find difficult or cumbersome — a policy that other localities would do well to study.

Shenzhen’s development has not always run smoothly. From the start, it has proceeded amid controversy. When the economic zone was first built, policymakers referred to it as “the frontlines” and said “reform must accompany blood, sweat and tears,” reflecting the difficulties in revving up businesses there.

Although many officials moved away from the ultra-leftist thinking of the late 1970s and early ’80s and came to recognize the value of a market-based economy, Shenzhen still had to break through systemic and regulatory shackles and run extreme risks.

Whenever the city came to an inflection point in its development or hit a major snag, it always kicked up discord and criticism. People asked whether Shenzhen was another treaty port of the kind established by foreign colonial powers in China during the 19th and early 20th centuries. Others questioned whether an area designed to increase capital flows could ever be called socialist. Still more decried it as “unconstitutional.”

But despite all the arguments, Shenzhen continued along its reformist path and even adopted market-based policies more decisively than before. It might be said that every controversy heralded a new round of ideological liberation for the city, allowing it to take its economy and society to new heights.

Shenzhen is a monument to reform and opening up whose significance cannot be understated. It represents not just the vanguard of China’s economic transformation, but the leading example around which other reforms have been arranged.

In the early years, Shenzhen bore witness to a succession of systemic innovations. Even after the market economy had been established as the ultimate goal of China’s reforms to its economic system by the central government, Shenzhen still has acted as a bold explorer. For instance, from around 1998 Shenzhen became the first place in China to streamline its approval system.

Currently, the city has taken on the significant responsibility of building a pilot zone for socialism with Chinese characteristics. It is also implementing a development strategy to boost innovation, establishing modern systems of production, and forming a new model for deepening comprehensive reform and opening.

The abundant flow of human talent, technology and capital are the bedrock of the market, but they are backed up by a basis of systemic and regulatory reform. Shenzhen should redouble its valuable experiences of success and resolutely and comprehensively deepen reform. The demands of the pilot zone are all-encompassing for the city.

Creating favorable business conditions does not depend on implementing actions on paper, but on undertaking specific, detailed measures that capture the right spirit. Government by rule of law cannot be just a slogan. Erecting barriers to official overreach and suppressing the urge to interfere in the market requires systemic and regulatory safeguards.

In recent years, China’s southern regions have enjoyed stronger economic development than the North. Companies and professionals have converged on the southeast, largely due to its better business environment. Some local governments have studied central policy documents on improving the habitat for entrepreneurs, and have even sent teams to inspect Shenzhen. But they seem to internalize little of the city’s essence, leading to muted results. We must reflect on whether they are unable or simply unwilling to recreate Shenzhen’s success.

It should be said that Shenzhen still faces many challenges. Several aspects of its systems are awaiting further improvement. To take the business environment as an example, Shenzhen aims to keep up with the world’s best, but constantly falls short in certain respects.

Certain problems, such as the substantial room for improvement in the field of government services, have been bugbears for both businesses and markets for some time, and the local government has even admitted fault for them. Others include the difficulties governing an increasingly sprawling urban area; the high production and operation costs; rising factory, store and home rents; and inadequate safeguards for people’s livelihoods, high-quality education, and medical resources. In practice, behind all these issues lie deep-rooted systemic ties that must be relinquished.

Shenzhen’s development is tied to the fate of the Chinese people. Forty years ago, transformations in the party line and policy turned the city near Hong Kong from a defense outpost into a regional hub.

Today, Shenzhen sits on a higher plane. Against the background of beleaguered globalization and uncertain international relations, Shenzhen must develop even more. Certainly, it needs to take a wider view, further liberalize its thinking, and focus on practical results. The city is a yardstick for the world to evaluate China’s commitment to continued reform and opening. China needs more Shenzhens, and the country’s overall development will also inform the course the city takes in the future.

The Chinese version of this article was published in Caixin Weekly on Aug. 10, 2020, and is only available for Caixin Global’s app users. To unlock more bilingual articles, download the Caixin app.