By Liu Peilin and Bonnie Cao 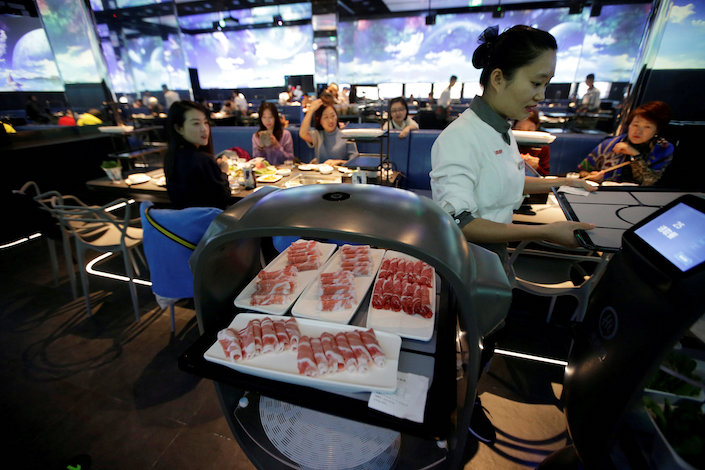 The company reported a 16.5% drop in first-half revenue from 11.69 billion yuan a year ago. The bottom-line red ink represents the first loss since the company’s IPO in 2018, Haidilao said late Tuesday in a filing with the Hong Kong stock exchange. It compared with a net profit of 911 million yuan in the same period last year.

Revenue from the restaurant operation, the major part of Haidilao’s revenue, decreased by 19.2% to 9.2 billion yuan as customer flows slumped amid the pandemic. The company issued a warning estimating a 900 million yuan to 1 billion yuan net loss for the first half of 2020 as the Covid-19 outbreak forced it to close down all of its restaurants on the Chinese mainland for three months. Haidilao reopened the restaurants in April.

Haidilao restaurants served more than 81 million customers with an average table turnover rate of 3.3 times a day in the first half of 2020. That compared with 109 million and 4.8 times in the same period last year.

The demand for takeout and delivery services helped pare some of the losses as revenue from the delivery business increased by 123.7% from 409.6 million yuan, it said.

However, Haidilao also expanded during the pandemic as it opened 173 new restaurants, bringing the total to 935 around the world by the end of the second quarter.

“Haidilao’s massive expansion is inevitable because the turnover rate of single stores and tables both declined,” said Zhu Danpeng, a food industry analyst. “It must keep opening new stores to maintain growth.”

The expansion brought along more costs. Staff costs increased by 11.6% to 4.74 billion yuan, accounting for 41.7% of revenue, up from 31.2% in the first half of last year. New bank loans increased more than 60 times to 3.23 billion yuan in the first six months of the year, it said.

The expansion-based growth will not be sustainable, according to Zhu. A crisis may loom in about three years if Haidilao’s service system and food menu can’t keep pace with its expansion, Zhu said.

Despite damage from the pandemic, Haidilao’s founder and controlling shareholder Zhang Yong and wife Shu Ping, who is co-founder and director of the company, topped the list of Singapore's wealthiest people this year with a combined net worth of $19 billion. Zhang, a Sichuan native, is a naturalized Singapore citizen.