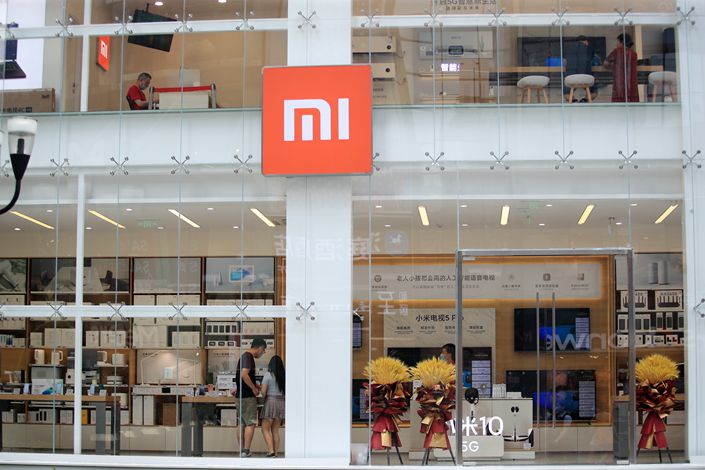 A Xiaomi store in Chongqing on Aug. 5. Photo: IC Photo

Chinese smartphone-maker Xiaomi Corp. closed up more than 11% on Thursday following the release of its latest quarterly financial report the day earlier which revealed stronger-than-expected earnings.

During the three months through June, Xiaomi more than doubled its net profit to 4.49 billion yuan ($716 million), beating the highest analyst estimate in a Bloomberg survey. Revenues rose by 3.15% to 53.5 billion yuan for the same period.

Xiaomi’s strong growth came against the backdrop of a generally sluggish global smartphone market amid disruption from the Covid-19 pandemic. During the second quarter, global smartphone shipments plummeted by 14% to 285 million units, according to research group Canalys.

Although Xiaomi’s smartphone shipments also dropped, it fared better than some of its major rivals including Oppo and Samsung. Altogether, the company’s smartphone shipments were down 10% to 28.8 million units, giving it a worldwide market share of 10.1% for the quarter, according to Canalys. Only three companies shipped more units – Huawei, Samsung, and Apple.

Xiaomi recorded impressive growth in some of its newer markets, including Europe and Latin America. In Europe, for example, it shot to third place for the first time in the quarter after shipments grew 64.9%, according to Canalys.

Xiaomi’s net income growth was also boosted by its drive to go upmarket, which it has pushed forward by recently rolling out a series of high-margin premium models.

Despite the 10% drop in smartphone shipments, revenue from smartphones dropped by only 1.2% for the quarter, showing that a growing proportion of sales were of its higher-end models.

And the average price of each Xiaomi smartphone sold in the second quarter was 1,116 yuan, up 11.8% from the same period last year, according to the company’s financial report.

While smartphones made up the largest segment of revenue, with 60%, in second place was the company’s so-called internet-of-things products, which include smart watches and floor-cleaning robots. For the second quarter, Xiaomi made 15.2 billion yuan from this business segment, contributing over 28% of revenue.

Going forward, the company will face the biggest headwinds in its most important smartphone market, India. A recent border conflict between India and China has given rise to increasing anti-China sentiment in the South Asian country, with many calling for boycotts of Chinese brands, including Xiaomi.