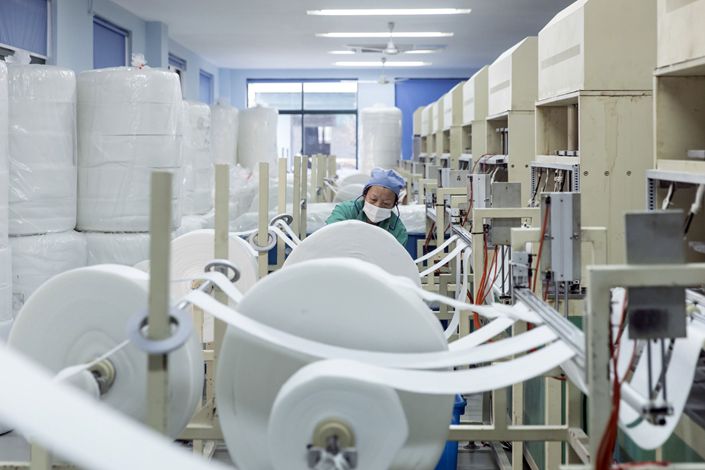 An employee works on the assembly line to make protective masks at a factory operated by Dasheng Health Products Manufacturing Co. in Shanghai

(Bloomberg) — Economic activity continued to rebound in August, with a gauge of the services industry at the strongest level since early 2018 while the expansion in manufacturing activity slowed slightly.

The nonmanufacturing gauge rose to 55.2 from July’s 54.2, the National Bureau of Statistics said Monday. The official manufacturing purchasing managers’ index moderated to 51 from 51.1 a month earlier. A reading above 50 indicates conditions improved from a month earlier.

China’s economy continued to recover from the slump in the first quarter, with government-led investment boosting demand and some reopening of overseas economies buoying the export sector. The hard-hit service industries have been picking up as the government eases virus control measures, with more subsectors such as cinemas opened again.

“Both the manufacturing and services PMIs are expected to stabilize within expansionary territory, with the possibility of a slight acceleration,” said Liu Xuezhi, an economist at the Bank of Communications in Shanghai. “It’s unlikely that policymakers will roll out large stimulus over the rest of the year, and they shouldn’t. They should instead focus on implementing existing policies.”

Although demand for manufactured goods is improving, with new orders rising to 52 and new export orders increasing to 49.1, firms still are suffering from a lack of demand.

“The recovery of demand is slower than that of production, which is starting to drag on the economic recovery,” China Logistics Information Center, which helped compile the data, wrote in a statement on its website. “More than half of companies still list the lack of market demand as the main difficulty” and that is making them cautious about expanding production further, according to the statement.

“Looking ahead, we expect the recovery to continue to make headway, propelled by incremental increases in domestic demand and further opening of overseas economies. That said, returning to pre-pandemic growth rates anytime soon would be a tall order,” said Chang Shu, from Bloomberg Economics.

A set of early indicators suggested China’s economy picked up speed in August, aided by a strong industrial sector and stock market, better business confidence and home and car sales.

However, small companies “still face many difficulties in production and operation,” including insufficient market demand and a shortage of capital, Zhao Qinghe, an NBS economist, said in a statement accompanying the data. The PMI for small manufacturers continued to decline, dropping to 47.7.