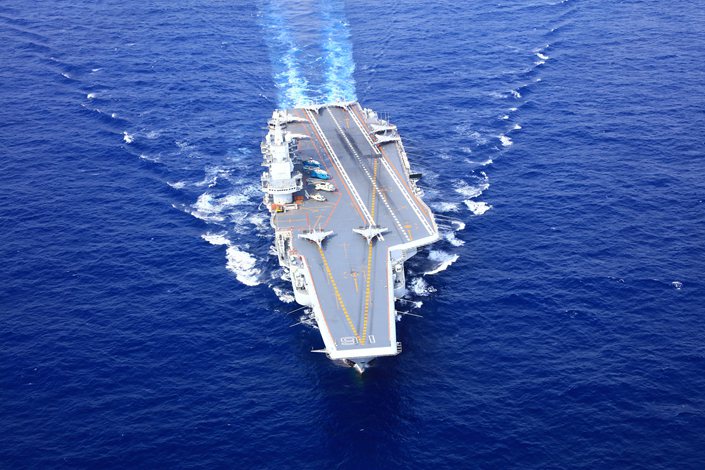 An academic at a military research body has confirmed long-rumored plans for the construction of another two aircraft carriers, saying one will be the first carrier to boast a catapult take-off system.

Li Jie, a Beijing-based senior researcher at the Naval Military Studies Research Institute of the People’s Liberation Army (PLA), told a national defense education event in the Chinese capital that the military “will continue to develop and build the third, and even the fourth aircraft carriers.”

The PLA Navy currently has two conventionally powered — as in non-nuclear — carriers on active service. They are the Liaoning, a Soviet-built Admiral Kuznetsov class vessel bought from Ukraine in 1998, and the Shandong, the first domestically developed carrier that went into service in December.

Li said that is “highly likely” that the third carrier will be equipped with a catapult launch system, which assists aircraft in taking off, instead of the ski-jump deck used in its two predecessors. He also said the power system of the fourth carrier would be “very likely to adopt significant changes,” according to a Sunday report from the Global Times, a state-run newspaper affiliated with the Communist Party’s official newspaper, the People’s Daily.

Li’s comments appear to be the first public confirmation from a PLA Navy expert of China’s ambitious plan to establish at least a four-carrier combat group.

It also coincided with reports that the two in-service carriers had for the first time carried out simultaneous exercises in the Bohai and Yellow seas over the weekend.

According to commercial satellite images released by Munich-based European Space Imaging, the Shandong and Liaoning carriers appeared in the Bohai Sea and the northern Yellow Sea respectively on Thursday.

Meanwhile, the Chinese maritime safety authority declared multiple no-entry zones in the Bohai and Yellow seas for certain periods of time, citing military exercises this month. The latest declared issued on Monday warned vessels not to enter the northern Yellow Sea due to “live fire drills” from Tuesday to Friday.

In November 2018, a Xinhua News Agency report first confirmed that China had been building a third aircraft carrier without elaboration.

“After six years, our domestically built aircraft carrier [the Shandong] has launched sea trials and it will soon go into service,” the report said. “The new type of carrier has been orderly built on ship-building berth,” it added, referring to a second domestically built carrier.

Zhu Yingfu, the chief designer of the Liaoning carrier was quoted by the magazine as saying that China was developing both a steam-powered and an electromagnetic catapult — and he personally preferred the latter.

Citing anonymous military sources, the Hong Kong-based South China Morning Post also reported in November that the Chinese navy was set to build a fourth aircraft carrier, which would also be conventionally powered. But naval chiefs have been considering plans to build a nuclear-powered vessel, the report said.

The U.S. Department of Defense also said in its latest China military power report that China’s third carrier “will be larger and fitted with a catapult launch system,” adding that it is “projected to be operational by 2024, with additional carriers to follow.”

Currently, only France and the United States have nuclear-powered aircraft carriers, with the latter operating over half of the world’s total number of carriers, with 12 in active service.