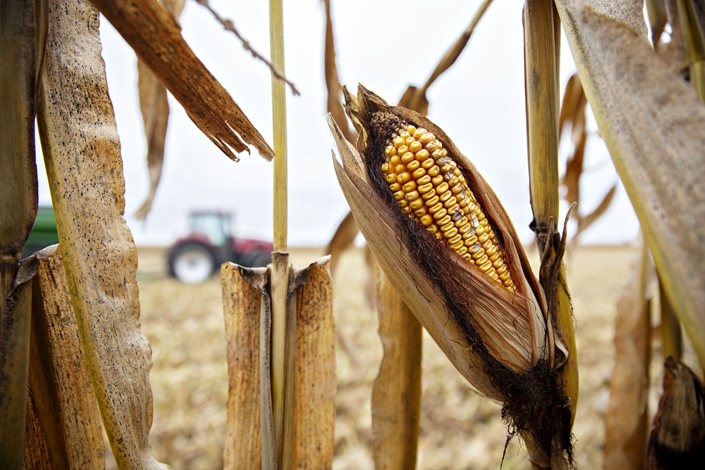 (Bloomberg) — Jiang Zhiyou, a farmer in his 60s, looks anxious as he contemplates the torrential rains hammering down on his 100 acres of ripe corn in China’s northeastern province of Heilongjiang. His troubles could get worse as another typhoon is on the way.

“There’s nothing we can do,” said Jiang in a resigned tone from his farm in Lifeng village, recalling similar weather in 2016 which devastated his crops and brought huge losses for his family. “The rain comes at the wrong time. It should have fallen 40 days earlier when the crops needed it most.”

Wang Yanlong expressed similar concerns as he walked along rows of mature corn in a neighboring village. His cooperative already slashed acreage by 30% in the spring after they missed the planting season because of rain. Wang said he still hopes for a good harvest, but “you can never be sure,” adding that the 2016 typhoon cut yields by a quarter from normal levels.

China’s top corn and soybean growing areas in the northeast are being whacked by three typhoons in less than a fortnight, flooding fields in some areas and hampering transport. The third one — Haishen — is forecast to bring torrential rains to the provinces of Heilongjiang and Jilin on Tuesday.

The corn harvest in the world’s top producer after the U.S. is being closely watched as demand for hog and poultry feed expands and state reserves dwindle, pushing local prices to the highest in five years. Purchases from the U.S. and Ukraine already exceed 10 million tons, and they could hit 20 million tons if U.S. prices stay competitive, said Feng Lichen, chief analyst with portal www.yumi.com.cn. That would make the country the world’s largest importer.

The purchases also help meet commitments under the U.S. trade deal. Imports that have been mostly ordered by state-owned companies are sold at a discount to local prices to benefit animal-feed mills in the south, said Feng. The surging imports have even sparked speculation that China could become chronically dependent on the world market for large supplies, as has happened with soybeans, where it accounts for more than 60% of global imports.

The northeastern provinces, which used to supply more than 100 million tons of corn to the rest of the country, have reduced outflows because of the rapid growth of the local refinery industry, where products include starch and syrup. Besides the refiners, the hog industry is also on an aggressive expansion drive as the country strives for larger, more efficient farms to increase production and counter African swine fever. Companies such as Wens Foodstuffs Group and Muyuan Foodstuff Co. are leading the charge on boosting output.

There are worries that production may not be able to keep up with all this demand. Still, there is some help available for suffering farmers. The Dalian Commodity Exchange in the northeast offers an insurance program to help growers cope with bad weather, said farmer Wang Yanlong. Because of the favorable compensation rates, some families were persuaded to grow corn rather than soybeans this year. Traders will be monitoring closely how the government balances the various incentives for corn and soybean production in coming months to try to meet the ballooning demand for both commodities.