By Huang Shulun and Luo Meihan 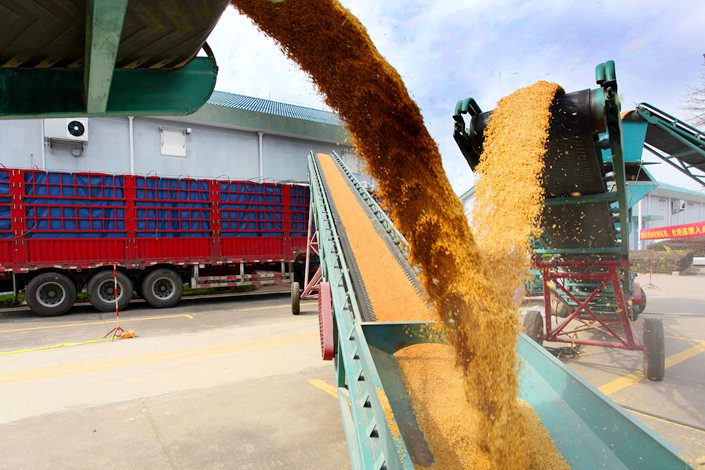 Grain is deposited at a depot in Wenling, Zhejiang province, on July 23.

Global food prices increased for the third consecutive month in August, driven by a rebound in demand as economies recover from the pandemic and an increase in imports by China as it seeks to meet U.S. trade deal commitments.

The increase was largely a result of rising cereal prices: The FAO Cereal Price Index rose 1.9% month-on-month, led by coarse grains. Both sorghum and barley saw strong import demand from China, according to the FAO.

Chinese officials have encouraged grain traders to import more, as the country is accelerating its agriculture product purchases from the U.S. to meet its commitments under the phase one trade deal, a grain trade middleman told Caixin.

In the first seven months, China imported a total of 2.3 million tons of sorghum, which is mainly used for liquor-making and animal feed, a dramatic increase of more than nine times over the same period in 2019, according to customs data (link in Chinese). Such imports have been a factor behind rising sorghum prices, up 8.7% from July and 33.4% above the year-ago level, FAO data showed.

The gap between domestic and overseas cereal prices is another factor, multiple industry insiders said. As China resumed work after bringing Covid-19 under control within its borders, recovering livestock farmers have driven up demand for cereals, leading to a notable rise in domestic cereal prices and demand for imports.

In July, the duty-paid and landed price of foreign corn delivered at China’s southern ports was 1.72 yuan ($0.3) per kilogram, 0.6 yuan lower than the price of domestic corn, with the price gap widening by 0.02 yuan per kilogram from June, according to (link in Chinese) the Ministry of Agriculture and Rural Affairs.

In a Thursday report, FAO adjusted its forecast for world trade in cereals in 2020/21, which is from July 2020 to June 2021, upwards to 441.4 million tons, up 7.1 million tons from its July forecast and 1.6% above the estimated 2019/20 level. The adjustment is chiefly meant to reflect higher world trade of maize than anticipated, suggesting strong import demand, especially in Asia, FAO said.