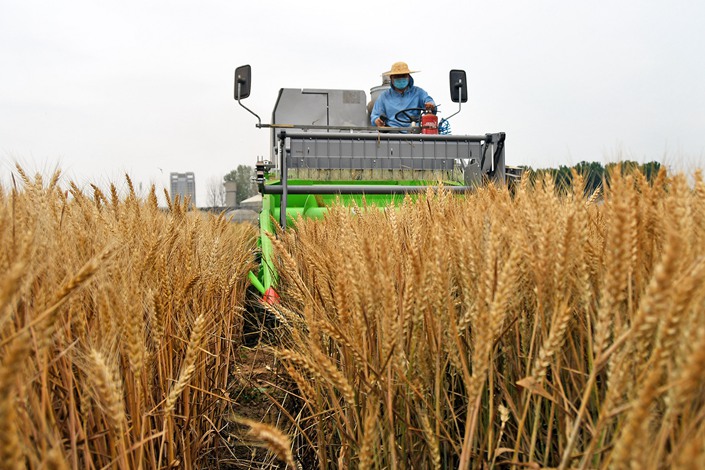 A farmer uses a harvester to harvest wheat on June 18 in Yantai, East China’s Shandong province.

Food security has made headlines in China since President Xi Jinping called for an end to “shameful” waste earlier this month, after widespread flooding in southern China and disruption to global supply chains from Covid-19 have raised the specter of food shortages.

While the likelihood of a food crisis remains remote, Xi was quoted as saying by state media that the country should “maintain a sense of crisis regarding food security, especially amid the fallout of the Covid-19 epidemic, despite the fact that China has scored consecutive bumper harvests.”

Here are four things to know about China’s food security amid the ongoing disruption to global supply.

Is there a global food crisis?

The world is now standing on the brink of its worst food crisis in over five decades amid the coronavirus pandemic, said UN Secretary-General António Guterres in June. “Unless immediate action is taken, it is increasingly clear that there is an impending global food emergency that could have long-term impacts on hundreds of millions of children and adults,” he said.

While global reserves of staple crops can still meet demand in theory, many major grain producers, such as rice-rich Vietnam, have imposed curbs on exports since March in order to prioritize their domestic demand. While this could aggravate food shortages in some developing countries that are highly dependent on imports, China is not such a country.

China’s domestic grain production is sufficient to feed its 1.4 billion people. The country’s grain output reached a new record of 664 million tons last year, marking the 14th annual increase in the last 16 years. This year’s summer harvest was also up 0.9% from a year earlier, according to the Ministry of Agriculture.

While imports of pork, soybeans and wheat have ramped up over the past few months – with wheat imports doubling from January to July – China’s purchases from overseas remain small compared to domestic production.

Only around 2% of China’s grain consumption is met by imports, according to the Ministry of Agriculture, which didn’t offer a timeframe for the statistic.

Imported rice accounted for about 1% of China’s rice consumption last year, which is “mainly used for the sake of variety,” said Wang Liaowei, senior economist at China National Grain and Oils Information Center in an interview with Xinhua this March. “Even if we do not import rice, it will not affect domestic market supply.”

Officials in China have reiterated that the country’s stockpiles are large enough to cope with supply shocks, often being large enough to meet national demand for months on end by themselves.

Take rice as an example, China produced 210 million tons of rice last year, while consuming 194 million tons. With 118 million tons in stock – almost half of the world’s reserves – China’s rice stockpile can feed the whole country for nine months even if there is no production at all. The reserves of corn and wheat could also meet the country’s demand for eight and 14 months respectively, according to Fu Yifu, a senior researcher at the Suning Institute of Finance.

What is disrupting the food supply?

According to China’s National Bureau of Statistics, food prices climbed 13.2% in July compared with a year ago. The price of pork, the nation’s favorite meat, increased by 85.7% during the period. While the pork sector in particular is still reeling from the impact of the African swine fever epidemic, the disruption to international trade caused by the coronavirus pandemic and tensions with Washington have put the country’s food imports in general under strain.

Devastating floods this year have made things even worse, affecting both domestic production and transportation. As farmers flee inundated fields and rescue boats chug through submerged neighborhoods, the floods have displaced more than 60 million people and caused 180 billion yuan ($26 billion) in direct economic losses.