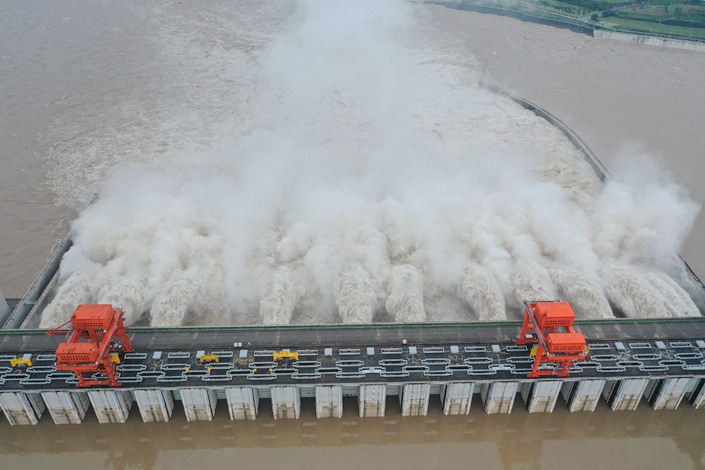 Since June, widespread flooding across southern China has left more than 200 people dead or missing, displaced tens of millions, and wreaked tens of billions of dollars in economic damage, according to government figures.

The disasters are a reminder of the fragile prosperity in the Yangtze basin, which houses an estimated one-third of the country’s population and generates about 40% of its total GDP, according to the World Resources Institute (WRI).

Here’s five things you need to know about the 2020 Yangtze floods and what they might mean for the region’s future.

Unusually heavy, persistent rain across southern China this summer has worsened the country’s annual flood season, which typically falls in June and July.

Some 760 millimeters (30 inches) of rain has fallen over the basin of the Yangtze and a major tributary, the Huai river, since the start of June, breaking a nearly 60-year record, Zhou Xuewen, deputy chief of the ministries of emergency management and water resources, said (link in Chinese) last week at an official press conference.

Torrential downpours in some areas have also triggered deadly flash floods and landslides.

Scientists have linked the extreme rainfall to higher-than-usual sea surface temperatures in the Indian Ocean that may have slowed the progression of monsoon weather fronts over China.

How bad are the deluges?

So far, the deluges have clustered in mid- and downstream regions, said Fan Xiao, a prominent Chinese geologist who has studied the river extensively. During the catastrophic Yangtze floods of 1998, which killed 4,000 and ruined 7 million homes, heavy rain triggered floods in upstream areas as well.

Overall, floods this summer have left 219 people dead or missing — the central government doesn’t consistently separate the figures in official announcements — and destroyed 54,000 homes, according to Zhou.

He added the inundations have affected more than 60 million people in total and caused 180 billion yuan ($26 billion) in direct economic losses, figures that are 12.7% and 15.5% higher than their respective five-year averages.

Water rises along parts of the Yangtze, such as Dongting and Poyang lakes, vastly exceeded safe levels this summer and in some cases broke records. The amount of water flowing into the Three Gorges reservoir hit a record (link in Chinese) 74,000 cubic meters per second on Wednesday.

How well has China dealt with the problem?

Experts said local emergency responses to the floods generally mitigated their impact on communities. But in some cases, botched policies have endangered businesses and property.

In July, for instance, officials in the eastern city of Enshi released floodwaters from a levee without giving local business owners enough prior warning to move their stock, causing substantial losses (link in Chinese).

A Caixin report (link in Chinese) this week also showed that underfunded flood defenses along small and midsize tributaries of the Yangtze had left communities there more vulnerable to deluges.

Other areas fared better, partly thanks to dam reinforcements made since the 1998 floods and technical advances, such as remote monitoring systems and drone patrols, said Jia Shaofeng, deputy director of the Water Resources Research Center at the Chinese Academy of Sciences.

Zhou, the water resources minister, said rescue workers evacuated more than 4 million people from vulnerable areas, “the most in recent years,” and that the state had released more than 2 billion yuan for “emergency rescue and effective support for people’s basic livelihoods.”

What can be done to prevent more Yangtze floods?

Severe floods can never be completely prevented, only reduced and alleviated, said David Shankman, a professor emeritus at the University of Alabama who is an expert on flooding in China.

“The problem is not the floods. The problem is that there are tens of millions of people living in areas that naturally flood,” he told Caixin in a phone interview.

Historically, communities in the mid- and downstream Yangtze basin built levees close to the water’s edge and settled large tracts of the floodplain. In doing so, they shrank the so-called flood storage area — the parts of the plain that temporarily hold water when deluges occur.

Consequently, the region is caught in a permanent tension between the need to find outlets for a river that floods annually, and the need to avoid inundating deeply embedded communities, agriculture and industry — a problem that Shankman has described as “intractable.”

Since 2000, authorities in the Yangtze region have moved to control floods by opening levees to increase the storage area and relocating communities farther from the water’s edge. They have also supported upstream reforestation, soil restoration, and the transformation of urban areas into water-storing “sponge cities” to soak up more rainfall and slow runoff.

But the influence of such programs is likely to be limited, according to Shankman. “The sum of those things will still not be able to prevent severe floods,” he said.

What future flood risks does the Yangtze face?

Urbanization and climate change could cause worse flooding in the Yangtze region in coming decades unless action is taken to mitigate risks, experts told Caixin.

Citing data compiled in partnership with four Dutch environmental organizations, Tianyi Luo, a water expert at the WRI in Beijing, said socioeconomic changes under a business-as-usual scenario — “basically, more people moving to live and work in harm’s way” — could drive a 250% rise in damage to urban assets in dollar terms in the Yangtze basin by 2030.

The impact of climate change is harder to gauge. Although research indicates that global heating is likely to drive a warmer, wetter future in the Yangtze basin, experts said a rise in overall precipitation would not necessarily correlate with more or worse floods, and avoided drawing a direct line between climate change and this summer’s inundations.

Experts said climate change would probably affect different parts of the Yangtze in different ways. In upstream areas, it is expected to drive around half of the increase in flood risks by 2030, a higher proportion than mid- and downstream areas, according to Luo.

Global heating is not only accelerating glacier melt and increasing runoff in the upper Yangtze, but may also cause and exacerbate extreme weather events, potentially raising flood risks by changing the patterns of water availability across the river basin, according to a 2019 study by China Water Risk, an environmental research body.

This year’s floods show the need to “fast-track decarbonization and adapt for impacts already baked in,” the organization said in a note earlier this month.