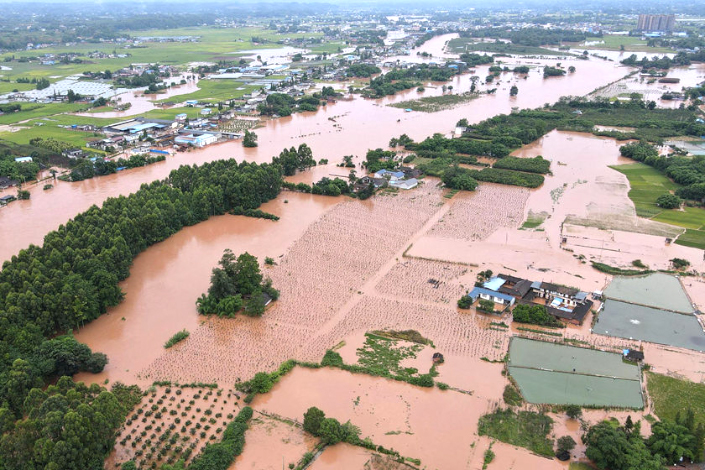 At least seven people have died and seven more are missing amid torrential rain in a semirural region of Southwest China, including a deluge that saw one area soaked with a record of nearly half a meter of precipitation on a single day, according to state media reports.

The cloudbursts have affected more than 140,000 people in Yaan, a small city in Sichuan province, and forced 15,000 to evacuate, the People’s Daily newspaper reported Thursday.

Six of the deaths occurred when severe rain triggered flash floods and mudslides in the mountainous county of Lushan, which swept away homes in a nearby village, the head of the county’s publicity office told Caixin on Wednesday. The other fatality occurred in the district of Yucheng.

The incidents come as parts of southern China battle the worst flooding in a generation. Since June, deluges driven by heavier-than-usual monsoon rains have killed dozens, displaced millions and caused economic losses worth billions of dollars.

The crisis in Yaan came amid two spates of intense precipitation on Monday and Wednesday, the People’s Daily reported. On Monday evening, 421 millimeters (16.5 inches) of rain was recorded in Lushan, around 80% higher the previous one-day record, according to the provincial weather office.

Summer floods are common in the county, where they killed two people last August.

On Tuesday, Sichuan raised its official flood alert from level four to three, the third-highest in a four-tier system.

Despite the unusually severe deluges this summer, China recorded a dramatic drop in so-called “geological disasters” in the first seven months of the year, according to data published last week by the Ministry of Natural Resources.

Around 3,000 such incidents, which include landslides, rockfalls, mudflows, sinkholes, fissures and subsidence, occurred between January and July, indicating a year-on-year decline of 39%, the ministry said.