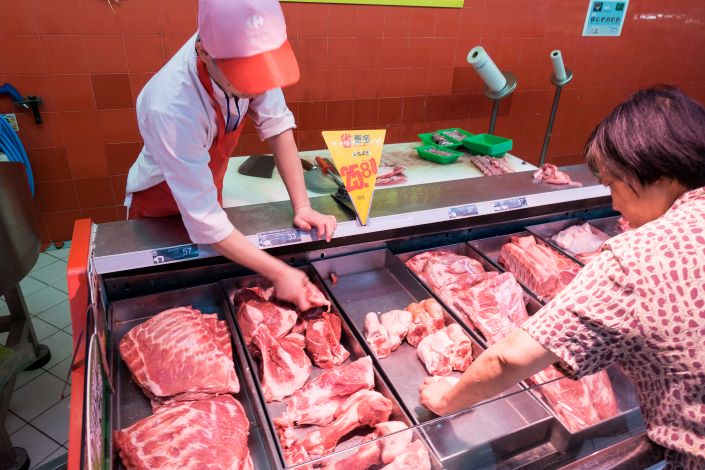 The consumer price index (CPI), which measures prices of a basket of consumer goods and services, rose 2.7% year-on-year (link in Chinese) in July, up from a 2.5% increase the previous month and marking the second straight month of acceleration, data from the National Bureau of Statistics (NBS) showed. The reading was in line with the median estimate in a Caixin survey (link in Chinese) of economists.

Food prices continued to drive up consumer inflation, rising 13.2% year-on-year in July, faster than the 11.1% growth in the previous month.

Pork prices, one of the key drivers of inflation over the past year amid low pork production due to the deadly African swine fever outbreak, rose 85.7% year-on-year in July. The reading represented a bigger increase than the 81.6% growth in the previous month, and accounted for about 2.32 percentage points of the CPI’s overall increase.

“Pork demand continued to increase as catering services recovered gradually,” an NBS statement (link in Chinese) said. “But the flooding in many places had a particular impact on transportation of live pigs, so the supply is still relatively tight.”

The price of fresh vegetables rose 7.9% year-on-year in July, accelerating from a 4.2% increase the previous month, which economists at Nomura International (Hong Kong) Ltd. said was also due to the supply shock by the recent heavy rainfall and the resulting widespread flooding.

The core CPI — which excludes more-volatile food and energy prices and may better reflect long-term inflation trends — rose 0.5% year-on-year in July, down from 0.9% growth the month before. The deceleration in core CPI growth was mainly due to low prices in the services sector amid a slow recovery from the fallout of the Covid-19 pandemic, Wu Jinduo, an analyst at brokerage China Great Wall Securities Co. Ltd., said in a commentary (link in Chinese).

Factory-gate deflation eased as the producer price index (PPI), which measures changes in prices of goods circulated among manufacturers and mining companies, fell 2.4% year-on-year (link in Chinese) in July. The reading was milder than a 3% drop the previous month and slightly less than the median estimate of a 2.5% decline in the Caixin survey.

The recovery in industrial production as well as market demand, and rising global commodity prices, were behind the PPI’s improvement, according to the official statement. As global crude oil prices continued their rebound, factory-gate prices in oil-related industries rose on a month-on-month basis, the statement said.

“We expect CPI inflation to resume its downtrend soon in coming months and drop to around 1% at year-end, due mainly to the higher base from surging pork prices, while PPI inflation could rise further in coming months on a global recovery,” Nomura economists wrote in a note.

They expected changes in the CPI and PPI in July would have a limited impact on markets and policymaking. The predicted that the central government would stick with its “wait and see” policy stance by neither strengthening nor rolling back existing easing measures.