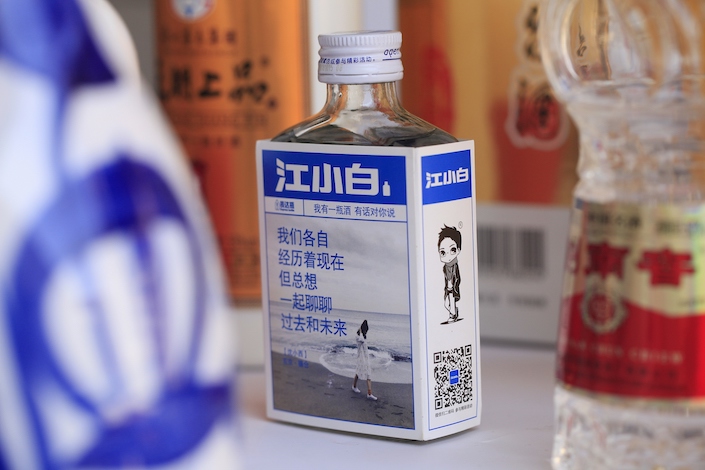 A bottle of Jiangxiaobai liquor with catchy quotes printed on its package appealing to young consumers.

(Bloomberg) — Chinese liquor distiller Chongqing Jiangxiaobai Liquor Co. raised about $300 million from investors in a fresh funding round, according to people familiar with the matter.

China Renaissance Holdings Ltd. led the funding round for the company, the people said, asking not to be identified as the matter is private. Baillie Gifford & Co. and China Merchants Bank International Capital Corp. were among investors that participated in the round, they said.

The round gave Jiangxiaobai a pre-funding valuation of roughly $1.6 billion, one of the people said. The company’s larger rival, Kweichow Moutai Co. Ltd., is valued at $325 billion with China’s most expensive stock.

Jiangxiaobai produces baijiu, a sorghum-based spirit that is extremely popular in China and markets its brands toward younger adults, according to its website. Founded in 2012, the company makes its products available in more than 20 countries. The company counts Hillhouse Capital Management and IDG Capital among existing investors.

China accounted for roughly 29% of global demand for spirits in 2019, according to Bloomberg Intelligence citing Euromonitor, and local companies producing baijiu represented 98% of that volume.

Representatives of Jiangxiaobai, Baillie Gifford and China Renaissance declined to comment. A representative of CMBI did not immediately respond to requests for comment.