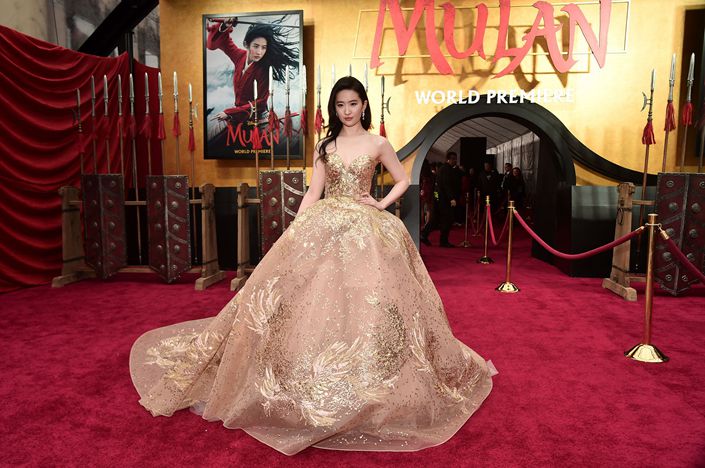 Yifei Liu attends the World Premiere of Disney's 'Mulan' at the Dolby Theatre in Hollywood, California on March 9.

(Bloomberg) — Walt Disney Co. investors eager to hear early results from the company’s unusual online release of the new film “Mulan” will have to wait.

Chief Financial Officer Christine McCarthy said Wednesday Disney is happy with the debut of “Mulan” on its streaming service and that the picture led to an increase in subscribers. But she declined to reveal any sales numbers.

Disney will talk more about the release during its next quarterly earnings call in early November, she said. The entertainment giant made the movie available online starting Sept. 4, but customers have to pay an additional $30 — on top of the usual $7-a-month charge.

The decision to release the film online was made after the coronavirus shut down theaters. McCarthy said only about 68% of U.S. theaters are open and many key markets remain closed, including Los Angeles and New York City. Consumers, particularly older ones and parents, remain skittish about attending theaters during the pandemic, she said.

“Would a family with young kids go? Probably not,” McCarthy said.

The company said last month that Disney+ had 60.5 million customers. Most of them are in the U.S. and Europe.

“A collateral benefit is what we saw in some additional new subscribers, but that wasn’t the driving force,” McCarthy said. “We’re certain some people came on the service that had been on the fence before.”

Hollywood executives will closely examine the results from “Mulan” and compare them to the expected ticket sales from a traditional release, as well as the options for introducing other first-run films in this fashion.

“Mulan,” a $200 million live-action remake of a 1998 animated hit, was originally supposed to be released in theaters in March. Disney delayed the debut several times because of the Covid-19 crisis. It is releasing the film theatrically in countries where Disney+ isn’t offered. The picture will debut in China, a critical market, on Friday.