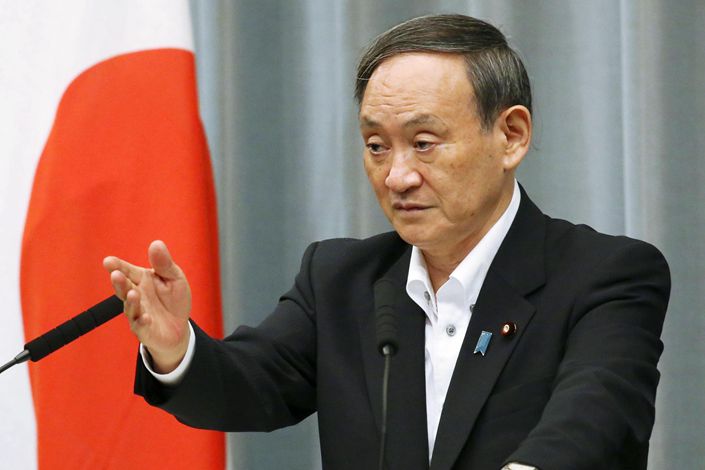 Suga is projected to receive a majority of votes in the first round, beating rivals Shigeru Ishiba and Fumio Kishida. The winner of this contest is all but certain to be chosen as the next prime minister at an extraordinary session of parliament convening Wednesday.

The new LDP leader serves until the end of September 2021, when Abe’s term was slated to expire. Abe announced his resignation Aug. 28, citing a chronic illness.

The winner begins selecting the new roster of top LDP officials and prospective cabinet members after Monday’s vote. Suga has said he would “put the right people in the right places,” indicating more of an emphasis on expertise than on factional politics.

Top party posts such as secretary general and head of the powerful Policy Research Council will be filled as early as Tuesday. The new cabinet will be installed after the parliamentary vote Wednesday.

The slimmed-down party election involves 394 lawmakers and 141 representatives from prefectural LDP chapters, but not the party’s rank-and-file members. This format, which is allowed in emergencies, favors Suga, who enjoys broad support in the political world.

Suga, a first-time leadership contender, has won the backing of five of the LDP’s seven factions including the largest two, the Hosoda and Aso factions. Though this does not mean every lawmaker in those factions will fall in line, it does put Suga in a strong position. He also is supported by some unaffiliated LDP members.

Most of the 47 prefectural LDP chapters have cast their preliminary ballots. Many allocate their votes in proportion to how their members vote. Suga has an edge here as well.

Suga supported Abe by serving as chief cabinet secretary from the start of the prime minister’s nearly eight-year tenure, lasting through multiple cabinet shakeups. He plans to continue Abe’s policies, including large-scale monetary easing and social security reform, as well as the prime minister’s approach to tackling the coronavirus pandemic.

One of Suga’s stated goals is to break down silos within Japan’s bureaucracy, by creating a new government agency to coordinate digital policy and reorganizing ministries, particularly the Health, Labor and Welfare Ministry.

Suga wants the national health insurance system to cover fertility treatments, to help boost Japan’s slumping birth rate, and the candidate has said he will solve the longstanding problem of waiting lists for daycare — a target that the Abe administration tried and failed to meet.

On Thursday, Suga suggested that Japan’s consumption tax rate would need to be raised again to sustain the country’s social safety net, though he appeared to retreat on this the following day, saying his comment was about “a future story.” He also has touched on consolidation of small and midsize enterprises and regional banks, many of which are struggling as populations decline.

Ishiba, a former defense minister running in his fourth LDP leadership race, has called for a change of course from the Abe administration, with an emphasis on regional revitalization. He advocates tax and fiscal policies aimed at correcting the excessive concentration of people and businesses in Tokyo.