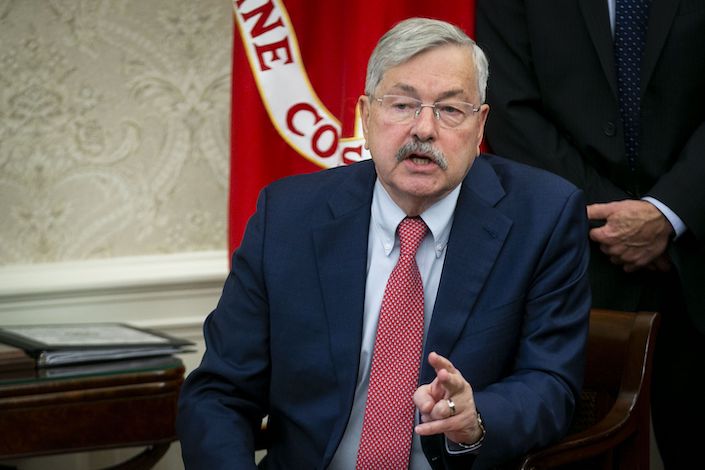 The embassy’s statement resolved hours of uncertainty about Branstad’s status after Secretary of State Michael Pompeo thanked the envoy for his service in a series of tweets, without explicitly saying whether he was resigning. Branstad was planning to depart Beijing early next month and return to Iowa, the embassy said.

“Branstad’s departure would be a loss to China-U.S. diplomacy as it would mean one less political heavyweight with a deep understanding of China based here,” said Wang Huiyao, an adviser to China’s cabinet and founder of the Center for China and Globalization. “My impression of Branstad from being at the same events is that he is someone who actively tried to ease China-U.S. tensions. His departure would be a loss to furthering bilateral relations.”

Over the weekend, Trump said Branstad would return to the U.S. while praising the campaign efforts of the ambassador’s son, Eric Branstad.

“Eric’s father’s coming home from China because he wants to campaign,” Trump said in a phone call with supporters of U.S. Senator Joni Ernst, a Republican whose close reelection battle in Iowa could help determine control of the upper house.

Branstad, a former long-time Iowa governor, was chosen in part because of his familiarity with Chinese President Xi Jinping, who visited the Midwestern U.S. state in 1985. China praised his appointment, hailing Branstad as an “old friend of the Chinese people,” a moniker reserved for a select few statesmen credited with improving Beijing’s ties with the wider world.

Branstad instead has presided over the most contentious period since the two nations established diplomatic relations more than 40 years ago, including tit-for-tat consulate closures and restrictions on diplomats. Last week, China’s Foreign Ministry accused Branstad of participating in an attempt to “trap” China by asking state media to publish an opinion piece containing “lies and malicious smears.”

“Ambassador Branstad has contributed to rebalancing U.S.-China relations so that it is results-oriented, reciprocal, and fair,” Pompeo said in a tweet. “This will have lasting, positive effects on U.S. foreign policy in the Asia-Pacific for decades to come.”

On Friday, China announced new restrictions on American diplomats operating in Hong Kong as well as the mainland in retaliation against recent curbs on China’s diplomatic activities in the U.S.

“It’s very difficult for Branstad to make a difference under current circumstances,” said Tao Wenzhao, a senior researcher in American studies at the government-backed Chinese Academy of Social Sciences. “The Trump administration’s suppression of China is too great. Of course, we hope the channels of communication and interaction remain open even if Branstad leaves.”