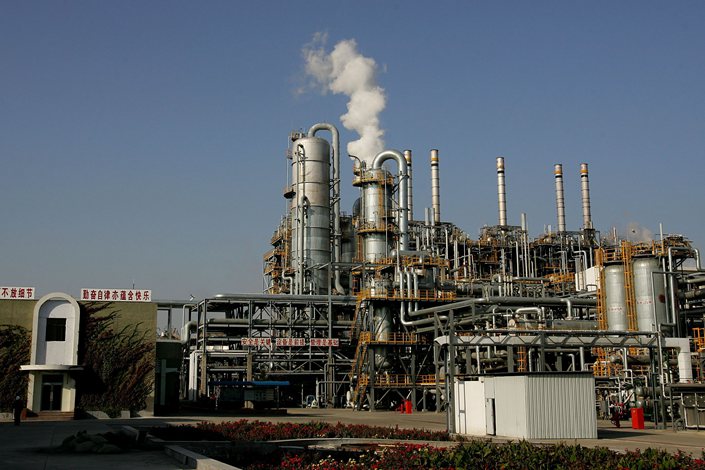 State-owned ChemChina was one of the first firms looking to tap the public debt markets since the U.S. Department of Defense late last month added it to a list of 11 companies that it claimed have links to the Chinese military.

The state-owned borrower priced a jumbo $2.4 billion dollar bond deal and a 500 million euro offering overnight, according to people familiar with the deal who are not authorized to speak publicly. It was the firm’s first global fundraising move since the Pentagon added it to a list of companies it said have connections to the Chinese military. Spreads on the new offshore notes widened as much as 10 basis points Tuesday morning in Hong Kong, according to traders.

The Beijing-based chemical manufacturing giant, which acquired Swiss pesticide producer Syngenta AG for $43 billion in 2017, was one of the first firms seeking to tap the public debt markets since the U.S. Department of Defense added it to a list of 11 companies which it claimed have links to the Chinese military in late August. The firm, also known as ChemChina, sold the equivalent of about $2.99 billion in offshore notes, and was said to target about $3 billion, Bloomberg reported previously.

The premium on final pricing was tight considering the large supply and spreads widened in the secondary market reflecting this, as well as investor concerns over potential sanctions and declining operating metrics,” according to Bloomberg Intelligence analyst Dan Wang. “We expect ChemChina’s spread to remain the widest among 100%-owned state enterprises, and its bonds trade much wider than BBB chemical peers,” he wrote in a note Monday.

Spreads on ChemChina’s newly sold bonds widened when they hit the secondary market, according to credit traders, suggesting the initial pricing may not have sufficiently accounted for investor worries as buyers then sought for a greater pick up on the notes.

The four dollar-denominated bonds totaling $2.4 billion drew more than $7.64 billion in orders, according to a person with knowledge of the deal. That would put the overall subscription ratio for the notes at 3.2 times the issuance size, below this year’s average of 4.9 times for Chinese investment-grade bonds, according to Bloomberg-compiled data of available deal statistics.

Concerns over potential U.S. sanction risks have been rising of late, prompting some fund managers to cut exposure to Chinese state-linked borrowers as bilateral tensions escalate head of the U.S. election.

China Three Gorges Corp., another firm added to the Department of Defense’s list of firms claimed to have ties to the Chinese military, is also looking to price notes in Asia’s offshore primary market Tuesday amid a flurry of sales and mandates that opened the week. The power generator is marketing five-year and 10-year dollar bonds, according to a person familiar with the deal.