Opinion: Despite Tensions, Trade and the Economy Still Central to U.S.-China Relations 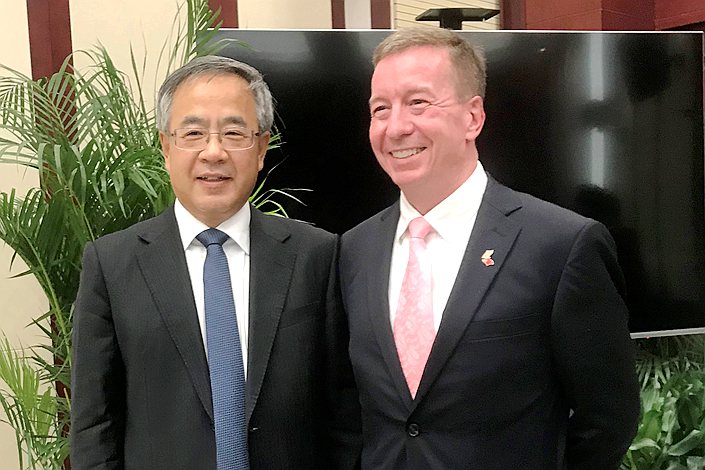 Greg Gilligan is chairman of the AmCham China. This article was his remarks at a Beijing roundtable meeting on Sept. 8, chaired by Chinese Vice Premier Hu Chunhua.

At the beginning of this year, the Covid-19 epidemic outbreak in Wuhan gradually escalated into a global pandemic defined by WHO and required global cooperation to contain. To prevent the spread of the pandemic, the Chinese government has taken many effective measures to ensure the safety and health of its people. After the pandemic was controlled, the government carried out prevention measures at regional levels and promoted the resumption of work. Localized policies were also issued to help enterprises. At the same time, responding to the challenges brought by the pandemic, AmCham China cooperated closely with China’s central and local governments. So far, AmCham China has donated cash and supplies worth more than 600 million yuan ($88.65 million) to the affected region.

The pandemic prevention measures now have been on track. To better support the resumption of work and the “protect foreign investment” policy carried out by the Chinese government, I am delighted to announce that AmCham China is arranging the first charter flight back to China. AmCham China members plan to return to China from the U.S. on Sept. 12 to ensure the operation of business. We are very grateful for the strong support from the State Council, relevant ministries and commissions, and the Beijing municipal government.

Also, AmCham China launched a “Social Impact Initiative” to pull together domestic and foreign enterprises, government, international organizations, research institutions to seek new opportunities of cooperation. The program focused on public health and the development of micro- and medium-sized enterprises, supporting the Chinese government to advance stability on the “six fronts” and security in the “six areas.”

2020 is a very tough year for AmCham China and our member companies. Beyond the impact of the Covid-19 pandemic, the worsening China-U.S. relations have pressured us. When I received the invitation for today’s conference in July, I planned to report on the major problems our member companies face in their operation in China. However, two months later, China-U.S. relations have dramatically worsened, becoming the most concerning topic for all U.S. companies in China and most foreign invested companies. I will share four observations on the current state of China-U.S. economic and trade relations, followed by three suggestions to the Chinese government.

Here are my four observations.

First, China-U.S. relations are now at a critical period in history, with mutual trust arguably at the lowest point since the establishment of diplomatic relations 40 years ago. In areas of trade, technology, and military, China-U.S. relations have changed from cooperation to competition. This highlights the importance of AmCham China’s role as a bridge between both governments. In order to manage differences, and to prevent major strategic misjudgments between the two countries, AmCham China now and will continue to work to strengthen the connection between China and U.S. governments through various means, and to promote direct communication between them.

Second, the lack of mutual trust between the two countries stems from a mutual misunderstanding of the other side, which comes from subjective factors, such as history, culture and social system, and delayed and asymmetric information. Beijing and Washington D.C. vary drastically in terms of geography, culture and language, communication means, and political system. The two countries have failed to be on the same page for information. This is a fact that supports AmCham China providing accurate information and constructive feedback. For example, every year, after releasing “American Business in China White Paper and China Business Climate Survey Report,” AmCham China will communicate with China’s central and local governments to ensure the policymakers and executors have first-hand information on foreign invested business in China. At the same time, AmCham China organizes trips for senior executives in China to visit the House (of Representatives) and the Senate, the executive departments, and research institutions to provide them with the latest news and comprehensive understanding on China. AmCham China provides objective data and facts, as well as constructive feedback, to both sides, regardless of the situation.

Third, the domestic political situation in the U.S. has changed, meaning that China should aim to improve and strengthen contacts with the U.S. We always talk about the U.S.’s engagement strategy for China, while China also has an engagement strategy for the U.S. Given the current situation, the Chinese government should enhance communication channels to gain broader support, and take advantage of AmCham China, U.S. media and other types of media in a way familiar to U.S. audiences to get in touch with U.S. politicians, business people and citizens.

Fourth, even in the face of deteriorating U.S.-China relations, a situation exacerbated by the Covid-19 pandemic, U.S. companies in China are still fully committed to the Chinese market. According to the “Business Climate Survey Report” released in March, more than 50% of member companies claimed that the business climate in China has been greatly improved since 2019. Also, it is notable that most U.S. companies do not plan to retreat from the Chinese market. Some plan to increase their investment in China. Less than one-fifth of companies have considered retreating from the Chinese market, but the trend of retreating also has declined in the past three years. This finding is once more proved in a report on supply chain strategy, released in May. According to the report, more than 70% of the interviewed companies do not have a plan to withdraw their production and supply chain from China. More companies choose the “China + 1” strategy to relieve pressure coming from the supply chain.

In response to the challenges of China-U.S. relations, I represent AmCham China to propose three suggestions to the assembled Chinese leaders.

First, it is necessary to ensure that economic and trade relations continue to be the foundation upon which the wider U.S.-China relationship is built. Enterprise is the main bridge for China-U.S. economic and trade cooperation. The Chinese government should continue to enhance communication with U.S .enterprises in China and to understand their needs through varied means. The government should make sure that U.S. enterprises in China participate in China’s reforms and modernization and contribute more to China-U.S. cooperation.

Second, there is a need to create a platform that provides an opportunity for policymakers and business representatives to build trust through open and direct dialogue. Due to China’s current social system, political culture and laws and regulations, foreign-invested companies can only access communications after a very time-consuming procedure, and the communication content is restrained by a set of rules. The policymakers, especially those who are on the executive level, have limited opportunity to learn the real needs and situations of U.S. enterprises in China. Compared with domestic enterprises, foreign enterprises have less communication channels and with limited effects. Thus, AmCham China hopes to play the role of a bridge through holding closed door conferences from time to time, and providing the Chinese government with comprehensive and objective data and information on U.S. enterprises in China. AmCham China aims to fill the communication gap between the two governments, and to ensure symmetric information flows on both sides. Also, AmCham China seeks to promote a mutual understanding and trust between the two countries, and to better facilitate the Chinese government in launching its policy of stable foreign investment and opening up.

Third, China should continue to strengthen high-level opening up, optimize the business environment, effectively expand and support foreign investment and development in China, and apply market forces to continue to attract foreign companies to China. In particular, recent policy developments, such as regulation on optimizing the business environment and foreign investment law implemented at the beginning of the year, purport to make clear that foreign-invested enterprises in China are treated equally in key areas such as licensing, standard setting, and government procurement. AmCham China also expects laws and regulations to be fully and consistently implemented.

AmCham will actively promote China-U.S. economic and trade cooperation. We have played a significant role in deepening business bonds and understanding between the two countries. I am personally very concerned about China-U.S. relations. U.S. enterprises in China now face great uncertainty and challenges. AmCham China hopes to be the trusted allies for both governments.

We hope to contribute to the mutual trust and benefit of China and the U.S., providing constructive advice and preventing the two countries from (falling into) the “Thucydides trap.” We are committed to work for the next century of China-U.S. cooperation.