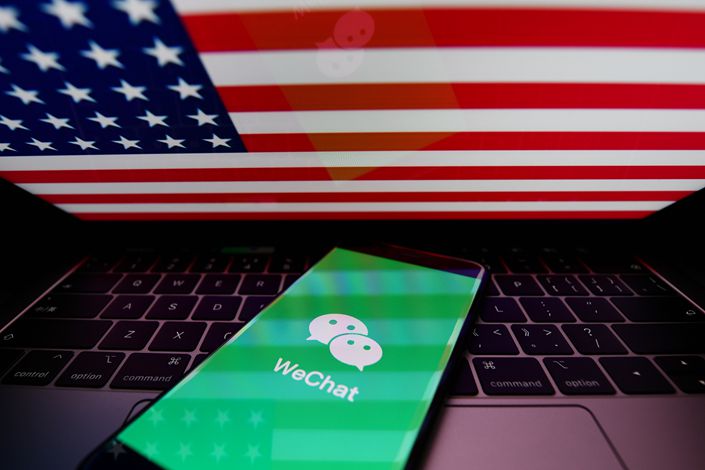 Eighty-eight percent of surveyed U.S. firms in China said losing the use of WeChat as a communication tool would hurt business.

U.S. companies operating in China have expressed alarm at Donald Trump's imminent WeChat ban, saying they fear it will blunt their competitive edge and hit their revenues.

The American Chamber of Commerce in Shanghai (AmCham Shanghai) released a survey Wednesday highlighting the confusion surrounding the scope of the order, and whether it would apply to U.S. companies and citizens overseas.

Eighty-eight percent of respondents said losing the use of WeChat as a communication tool would negatively impact their business, including by interfering with their ability to contact staff and government officials. Meanwhile 56.3% said it would make them less competitive.

Two-fifths said it would decrease their annual revenue in China, while a further two-fifths said they were unsure what impact it would have on their top line.

Ker Gibbs, head of the AmCham Shanghai, said member companies are concerned that the vague wording of the order leaves open the possibility their operations in China, where WeChat is a ubiquitous commercial tool, would be subject to the ban. “We don’t have any clarity on it at all,” said Gibbs. “The administration is being very unclear and non-communicative.”

Revenue impacts to U.S. companies abroad could be felt at home, he said. “The more successful they are over here, the more they can invest in the U.S. as well.”

Gibbs pointed out that about 5% of respondents to the survey said they would need to cut staff in the U.S. if the WeChat ban went through.

The executive order (EO), which was announced on Aug. 7, said unspecified “transactions” with WeChat and its parent Tencent Holdings Ltd. would be affected, though the Trump administration quickly moved to play down the idea business with Tencent’s many other companies might be affected.

The extent of the blow would depend on how the scope of the order winds up being defined when it takes effect on Sept. 20. Which “transactions” it effects will be nominated by the secretary of state on that day, the order says.

If it applies to U.S. companies and American citizens in China, one in 10 of respondents to the AmCham survey predicted losses of more than 30%.

But the impacts would be “much smaller” if the order was limited to transactions within the United States, with 9.2% saying they would see a substantial impact with losses greater than 10%, and a quarter saying their revenue would be unaffected.

“It is important to define what would be called a transaction and whether this (executive order) will be applied to U.S. companies based in China,” said one of the survey’s 142 respondents, according to the AmCham Shanghai, which did not name them.

“While AmCham Shanghai supports the U.S. government’s efforts to protect the data of U.S. citizens and the need for reciprocity in the U.S.-China trade relationship, we are concerned that an overly broad implementation of the EO could have a devastating impact on American companies in China,” said the body on behalf of its 1,400 corporate members.