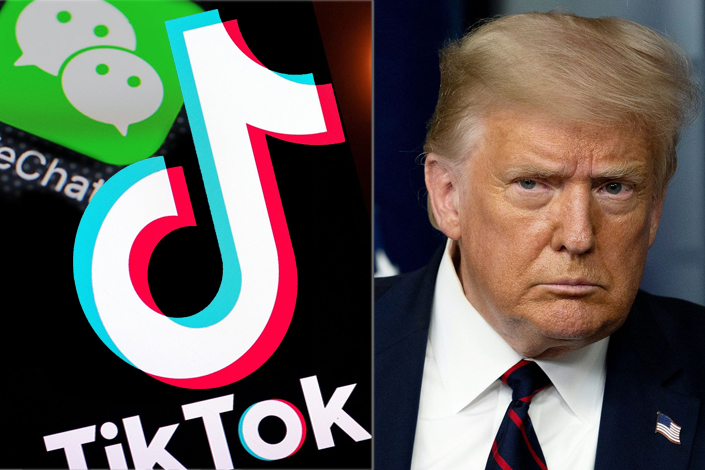 As written, they will effectively ban “any transaction by any person, or with respect to any property, subject to the jurisdiction of the United States” with the two Chinese companies and their subsidiaries, though U.S. officials later appeared to backpedal and limit the scope of the Tencent order to the WeChat app.

Crucially, the orders, which are to take effect on Sept. 20, do not define which “transactions” will be targeted, saying they will be nominated by the secretary of state on that day.

That deadline falls five days after a previous deadline Trump gave ByteDance to sell TikTok’s U.S. operations to a “very American company” or shut down, and it is unclear what impact the new order will have on talks already underway with Microsoft. ByteDance is now threatening legal action.

They also come a day after U.S. Secretary of State Mike Pompeo urged American businesses to remove Chinese apps from their stores as part of a swathe of measures under the administration’s resurfaced “Clean Network” policy.

Trump’s authority to issue the Thursday bans comes from the International Emergency Economic Powers Act and the National Emergencies Act. They aim to address an alleged “national emergency” threatening U.S. national security, foreign policy and economic interests referred to in the May 2019 executive order that set the stage for the U.S. ban on Huawei.

According to statistics from Apptopia, an app data tracking company, WeChat has 19 million daily active users in the U.S.

A Tencent insider who spoke to Caixin on condition of anonymity said the ban could mean anything from banning money transfers on the app to stopping U.S. companies and organizations from opening official WeChat accounts, potentially closing off their access to Chinese consumers.

Tencent has not issued an official response and requests from Caixin went unanswered.

ByteDance protested the ban in a WeChat post Friday, saying “if the U.S. government cannot treat us fairly, we will resort to the U.S. courts.”

Thursday’s executive order would shatter the faith of international companies in America’s commitment to the rule of law, which had for decades attracted foreign investment and driven U.S. economic growth, the company said.

“The order sets a dangerous precedent that violates freedom of expression and the principle of open markets,” it said. “For the past year, we have been seeking to communicate with the U.S. government sincerely, and to provide constructive solutions to their concerns. But what we are facing is that the U.S. government disregards the facts … and tries to interfere in negotiations between private companies.”

The company said there was “no substantive basis” for the claim its TikTok app might be used to disseminate propaganda, and that the way it collects data was no different from thousands of other mobile apps around the world.

It urged TikTok users to contact American politicians and voice their opinions.

John Lee, a senior fellow at the Hudson Institute in Washington and the U.S. Studies Center in Sydney, told Caixin the executive orders were based on “legitimate concerns” that under Chinese law, personal and other data accumulated by Chinese firms has to be handed over to the Chinese government if authorities claim it is essential for national security or intelligence purposes.

But a blanket ban on all WeChat transactions, for instance, was a “much more difficult legal argument to make given the range of transactions and functions that WeChat can facilitate,” including chat, financial and third-party services, he said.

Lee said the nature and prospects of a legal challenge to the order would only become clear when the U.S. secretary of commerce decides which “transactions” are to be proscribed.

The Trump administration’s move to ban U.S. residents from doing business with Tencent and its WeChat app rippled through Chinese markets, erasing $34.6 billion from the internet giant’s market value and sending the yuan to its biggest slump in two weeks.

The U.S. president’s executive order added to investor concern that the deteriorating U.S.-China relationship will weigh on companies, economies and markets. Initial confusion over the ban’s scope led to volatile trading on Friday, with Tencent plunging more than 10% during the morning session in Hong Kong. The stock pared losses to close down 5% after a U.S. said the ban would only cover WeChat.

Before Friday’s drop Tencent was worth $686 billion, making it the world’s eighth-largest company by market capitalization and bigger than Berkshire Hathaway Inc. Its huge size means it occupies a dominant position on global indexes. The firm accounts for more than 6% of MSCI Inc.’s developing nation gauge and 4% of its Asia-Pacific measure.

Hong Kong’s Hang Seng Index slumped 1.6% on Friday, while the offshore yuan weakened as much as 0.45%.

The vaguely worded WeChat order had triggered fears it would apply not only to Tencent’s messaging and payments services in the U.S. but also to business relationships with some of America’s largest corporations. Tencent, ranked by Newzoo as the world’s biggest games publisher by revenue in 2019, collaborates with U.S. industry leaders like Activision Blizzard Inc. and Electronics Arts Inc. It also holds a large stake in “Fortnite”-maker Epic Games Inc. and owns “League of Legends” developer Riot Games Inc.

Tencent does not separate out its U.S. gaming sector revenue, but last year its overseas gaming revenue more than doubled year-on-year, and foreign markets made up 23% of the company’s more than 30 billion yuan in online gaming revenue for the fourth quarter of 2019.

The White House was reportedly briefing against the idea Trump’s orders would have a collateral impact on U.S. gamers, a significant political base for the president, on Thursday evening.

Lee said the fact that any services offered by Tencent, Huawei and ByteDance are “on the radar of the U.S. government introduces an immediate uncertainty for local partners using these Chinese platforms as to what will be allowed or disallowed into the future.”

It would encourage firms and services to partner with non-Chinese entities in future, he said.

“This is part of the technological decoupling process that is already well underway,” he said.