Whatever Happened to China’s Giant Piles of Abandoned Bicycles? 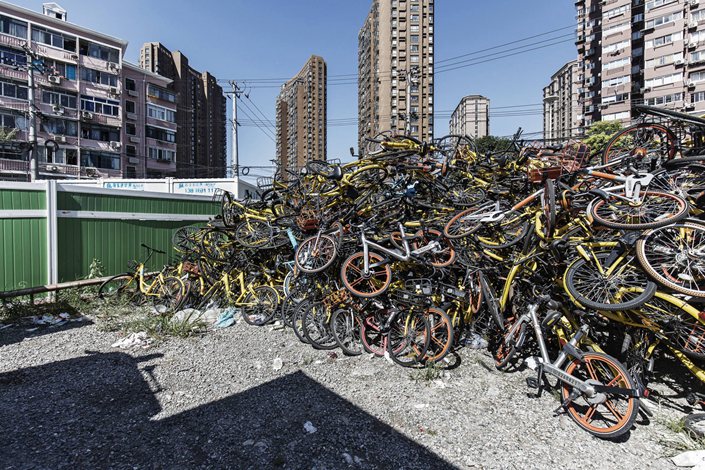 Ride-sharing bicycles sit in a pile in Shanghai on Sept. 12, 2017. Photo: Bloomberg

(Bloomberg) — Remember those colorful mountains of metal in China after its bike-sharing boom went bust in 2017? Ever wondered what happened to them? Here’s how you recycle bicycles.

The bike-sharing craze in China five years ago sucked in billions of dollars of investors’ cash and clients’ deposits that start-ups spent on millions of new bikes in an effort to grab market share. When the inevitable collapse came, most of the companies went bankrupt, leaving city authorities having to pay to clean up the mess.

“When the new industry was seen as profitable, everyone jumped in to share a piece of the cake’” said Yang Tengfei, vice general manager of China Recycling Resources Co., which works with the companies on recycling. “Capital flew in but management lagged behind, leaving an industry full of problems.”

The sheer volume of abandoned bikes is overwhelming. One government unit estimates there were as many as 20 million shared bikes in use in 2017. Xiaoming, just one of the 60 or so bike-sharing app companies that went bust, left 430,000 of them across more than 10 cities. One of the biggest heaps in central Shanghai had 30,000 abandoned bikes, according to Xinhua.

Today, only three brands are commonly seen in the major cities. Yang’s China Recycling has scrapped about 4 million shared bikes since 2017. It spends about 10 million yuan each month buying used bikes and parts to salvage the steel, metal and plastic.

No one wants to pay for it. The bankrupt companies are gone, mostly unable to even return customers’ deposits. The investments have been written off, so the taxpayer has to foot the bill. It costs 9.6 yuan ($1.40) to remove each abandoned bike from the street, according to the government in Hangzhou. Bikes from the boom are still being found in rivers and overgrown verges and, added to that, safety rules mean that even the remaining players have to replace their vehicles every few years.

The coronavirus has sparked a revival in bike-sharing in China as people remain wary of public transport. And the surviving companies have vowed to be responsible for the “whole lifecycle” of their vehicles. When they have to scrap them, they’ve also found a variety of novel ways to recycle them. Mobike and Yuue discovered that disassembled frames and parts make interesting designer chairs and lamps. Mobike also turned the rubber from 7,800 old tires into the surface for a running track in a town in Shaanxi province. And a Myanmar philanthropist bought used bikes from Chinese company Ofo and Singapore’s Obike and donated them to local schoolchildren to help them get to class.

“Many small shared-bike companies didn’t have the awareness or ability to be sustainable,” said Xie Peng, manager of the green supply chain department of Hellobike, one of the surviving companies. “As a big internet company, it’s important to be both environment-friendly and user-friendly.”

The firm has found a truly internet-friendly use for some of its retired bikes: a home for stray cats.