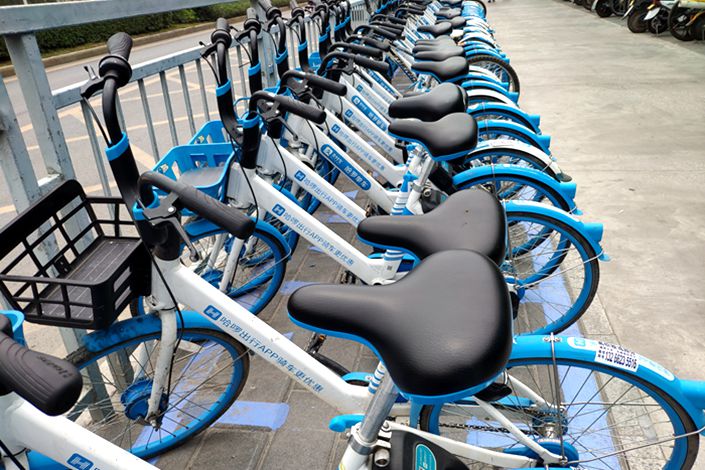 Hellobike shared bicycles are displayed on a street in Shenzhen, Guangdong province, on Sept. 3.

The experiment is part of Beijing’s push for wider adoption and commercialization of the BeiDou Navigation Satellite System in the country’s location service industry, which is expected to exceed 400 billion yuan ($58.5 billion) in value by year-end.

With guidance from the city’s transportation bureau, shared bikes in certain parts of Shenzhen will need to be installed with BeiDou modules, which would display nearby parking spots managed by bike-sharing companies, Caixin has learned. Users will have to park them within virtually fenced parking spots at the end of their trip, disabling the bicycle’s lock until the user puts it in a permitted location.

BeiDou, which was completed in July after more than 25 years in development, came about as a more precise alternative to GPS, which is controlled by the U.S. military but free for companies worldwide to use. The government is heavily promoting use of BeiDou both in and out of China, even as many companies are reluctant to adopt it due to its newness.

At the same time, China’s regulators have struggled to manage the bike-sharing industry, whose meteoric rise has left millions of bicycles carelessly parked on sidewalks or blocking already-crowded roads, especially in big cities like Beijing and Shenzhen.

The service Qianxun provides can track locations with accuracy of below 1 meter, with other applications including self-driving cars and drones.

A market leader and one of the first providers of such services, Qianxun has built some 2,800 BeiDou base stations across the country. One of its competitors, Sixents Technology, which received 1.2 million yuan of investment from tech giant Tencent Holdings Ltd. this year, said it will have 2,200 base stations by year-end.