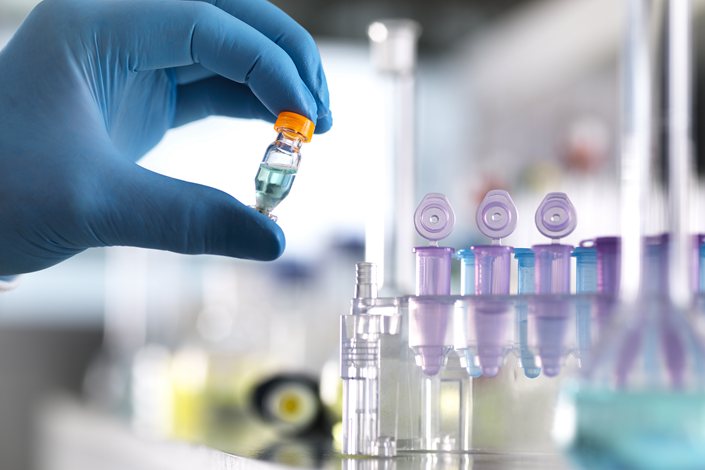 Through 2020, travel restrictions between China and India have thrown an enormous drug trade into chaos.

(Sixth Tone) — When the mail arrived last Thursday, Ying Junjing nearly wept with relief: She was safe — for another few months, at least.

The 43-year-old has been living with chronic leukemia for two decades. To maintain her health, she relies on regular shipments of imatinib — a targeted drug developed by the Swiss pharmaceutical firm Novartis AG and sold under the brand name Glivec.

But over recent months, the deliveries have become increasingly unreliable. Now, when Ying orders a fresh batch of imatinib, she’s unsure when — or whether — the vital medication will be dispatched.

“It used to take a week to 10 days for the drugs to arrive,” Ying tells Sixth Tone. “But after the pandemic broke out, things became unpredictable — it could be over a month, or completely unclear.”

The problem is that Ying buys the drugs from a company in India, which sells a generic version of imatinib at a fraction of the price charged by Chinese suppliers. For thousands of Chinese cancer patients, importing pills from South Asia is the only way to afford potentially life-saving drugs.

Through 2020, however, travel restrictions between China and India have thrown this enormous drug trade into chaos. And the situation shows little sign of improving amid tense relations between the two countries.

Before her package arrived last week, Ying had less than a month’s supply of imatinib left. Many other leukemia patients she knows are in even worse positions.

“I’m really lucky,” says Ying. “Few of the patients in our chat group have received drug deliveries from India. Many placed their orders long before me — in July.”

It’s unclear exactly how many people in China buy cancer medication from India, but anecdotal evidence suggests the number is in the hundreds of thousands at least.

He Xiaobing, CEO of Beijing Memorial Pharmaceutical, a Chinese firm that specializes in coordinating clinical trials, has 14 years of experience dealing with cancer patients in the Chinese and Indian markets. He tells Sixth Tone demand for India-produced drugs among Chinese patients is enormous, especially among those with liver cancer, prostate cancer, non-small-cell lung carcinoma, renal carcinoma, and chronic granulocytic leukemia — the condition from which Ying suffers.

Each year, around 500,000 people in China are diagnosed with liver cancer alone. He estimates around half of them use generic drugs for treatment. The situation is similar with patients of many other conditions, he adds.

Chinese patients buy off-patent medication from several sources, including domestic manufacturers, but India — the world’s largest producer of generic drugs — is a major supplier. When discussing treatment options, many in China simply refer to nonbranded products as “Indian drugs.”

A black market for made-in-India pills first emerged in China due to the massive gap in drug prices between the two countries. For many Chinese families, the increased availability of cheaper overseas medication was life-changing.

Ying was diagnosed with leukemia in her early 20s, just as Novartis was bringing Glivec to the Chinese market. The exciting new treatment, however, cost 23,500 yuan ($2,800) per month — far beyond what Ying’s family could afford.

For the next decade, Ying’s parents managed to keep their daughter supplied with Glivec thanks to assistance from a nonprofit called the China Charity Federation, which subsidized 75% of the treatment costs. But the 70,000-yuan annual expense was an enormous drain on the family, which lives in a small county in the eastern Zhejiang province.

“This was a big burden for my parents,” says Ying. “After my diagnosis in 2000, I didn’t work for an entire decade and lived with the support of my parents, who were average wage earners in our small county. In the early years, I frequently suffered from headaches and fevers — I wasn’t able to pick up any kind of job.”

In 2013, Ying’s condition worsened. Her doctor advised the family to increase her dosage of Glivec, but they couldn’t afford the extra pills. It was then that Ying decided to explore the possibility of buying medication from India.

“My trust in Indian generic drugs came from chatting with other patients in a QQ group (an online messaging platform),” says Ying. “They had used them and shared their positive feedback.”

A QQ contact passed Ying an email address. To order up to four boxes of imatinib, she just had to send a message with her address and requirements, and then wire the money. The cost was just $100 per box — less than one-tenth the price of Glivec in China.

Ying had no idea who the supplier was — she speaks little English — but the service worked like a charm. Within a week or two of placing the order, the imatinib would arrive via EMS, the cross-border express mail service.

At the time, what Ying was doing was illegal. China labeled any unapproved pharmaceutical imports “fake drugs,” and those caught selling them were harshly punished — sometimes with long prison sentences.

But many Chinese cancer patients didn’t care, and the market for Indian drugs flourished. Jin Ni, a resident of the eastern city of Taizhou, recalls speaking with many families in the hospital after her mother was diagnosed with lung cancer in 2009.

“They were all using Indian drugs,” Jin tells Sixth Tone. She adds the targeted drug used to treat non-small-cell lung cancer — gefitinib — cost 15,000 yuan per month in China at the time. “It’s unaffordable for average Chinese families, no matter urban or rural.”

Eventually, the Chinese government appeared to accept the benefits of generic drug imports and began to semi-legitimize the trade. In late 2019, China removed the “fake drugs” label from generic drugs widely available overseas and relaxed punishments for those caught distributing them.

By this point, made-in-India drugs were flooding into China via two main channels. Many patients, including Ying, relied on EMS, which is cheaper and less closely monitored than commercial delivery services like DHL and UPS. Others relied on professional buyers — known as daigou in Chinese — to get packages across the border.

“In seven years, I’d never encountered any difficulties accessing my drugs via EMS,” says Ying. “I was never required to provide any documents to any authority.”

But things have changed radically in 2020.

As COVID-19 began to spread through China in February, India canceled the visas of Chinese citizens and stopped issuing new entry permits. A month later, China introduced its own travel ban preventing foreign citizens from entering the country.

The visa restrictions cut off daigou services almost entirely, forcing most cancer patients to rely solely on EMS to obtain their medication.

Express deliveries, however, have also been severely disrupted. Ying says she was forced to turn to fellow leukemia patients with large stocks of imatinib to supplement her own supplies during the first half of the year, due to the difficulty of obtaining boxes from India.

Then, on July 23, India took the unprecedented step of removing China from its list of EMS delivery destinations, citing the limited availability of flights.

The Indian authorities reversed the decision two weeks later, but the move unnerved many in China. Many patients are still waiting for packages to be shipped from India.

“Patients are generally very anxious,” says He. “But as many keep one to three months’ worth of drugs at home, I haven’t heard about a patient running out of drugs yet.”

Cancer drugs have become much cheaper and more readily available in China over recent years, but a large number of Chinese are still reliant on imported pills.

In Ying’s home province of Zhejiang — one of the wealthiest in China — Glivec is now included in public insurance schemes that provide patients with up to an 85% subsidy. This has reduced the cost of the drug to 18,000 yuan per year or less for most patients.

Even this price, however, is too much for some patients. And many Chinese provinces can’t afford to provide patients with such a high level of remuneration on drug costs.

According to He, most of the patients using Indian drugs he has encountered are elderly and based in rural areas, where income levels are lower than in the cities.

“They’re heavily dependent on their children to pay for these drugs,” says He. “They won’t have much spare money to spend on purchasing more drugs for future use.”

Ying is fortunate enough to be able to switch to branded drugs if necessary. As her condition has stabilized, she has started working at a local hospital, earning up to 5,000 yuan per month. But she’s reluctant to pay more for her medication.

“My parents sacrificed a lot due to my disease ... It’s cost my parents almost their entire life savings,” says Ying. “If I can save some money, I’d like to spend it on improving their lives.”

She’s also hesitant about switching drug suppliers for health reasons. This year, her condition has remained stable. But for chronic granulocytic leukemia patients, there’s always a risk that a genetic mutation could cause a sudden acceleration in the disease.

“The Indian medicines have worked on me very well,” says Ying. “I don’t dare just change to another brand.”

Unless the travel disruptions ease, patients may be left with no choice. According to Ying, most of the leukemia patients she knows are running out of supplies.

For now, Ying continues to order fresh batches of pills via email. Others, however, are exploring alternative channels, such as agencies that claim to have large stocks of cancer drugs stored in Chinese warehouses.

One agency reached by Sixth Tone says the firm bought large quantities of drugs from Natco Pharma — a major Indian pharmaceutical firm — before India suspended its EMS services to China. It charges less than 500 yuan per box of imatinib — even less than the price Ying pays.

“It took up to 35 days for them to arrive; now it takes almost forever,” says a staff member from the agency. “If you don’t trust us, you can find a lab to test the ingredients before you take them.”

He Xiaobing, however, urges patients to exercise caution when buying from daigou. Given the unpredictable situation, it’s likely the number of counterfeit drugs on the market will rise.

“Patients should stay alert whenever a daigou service promises to send them Indian generic drugs,” He says. “Fake generic drugs exist in both India and China.”

This article was originally published by Sixth Tone. Read the original piece here.