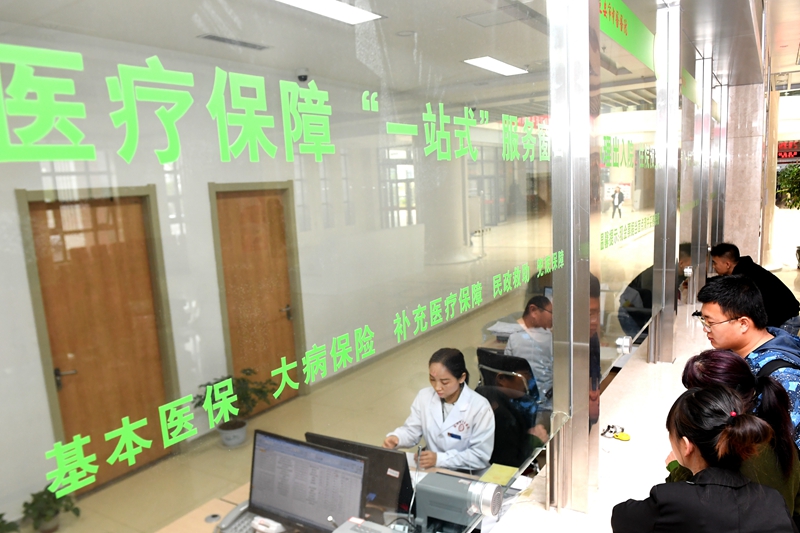 Chinese authorities have quietly set in motion a long-discussed restructuring of the country’s medical insurance system that will affect more than 300 million urban residents, although debates remain unsettled on some key elements.

China’s state health insurance system includes two parts. One is for urban employees, funded by money collected directly from workers’ monthly salaries and their employers. A separate system covers the urban unemployed and rural residents and relies heavily on government subsidies because of low personal contributions. Altogether, the system covers nearly 95% of the country’s 1.4 billion population, allowing people to get 50%–90% reimbursement of medical spending.

The restructuring initiative marks the first revision to the 22-year-old program covering urban employees. It includes changes discussed for more than a decade that will alter how billions of yuan of contributions will be managed and spent. Currently the insurance system’s accounts include almost 850 billion yuan ($126 billion) of funds accumulated over the years.

In a unique way compared with other countries, China’s health insurance program for urban employees consists of two parts — a mutual account pooling money from part of the contributions for public spending, and personal accounts that can be accessed only by individual contributors. Singapore adopted a similar system that has functioned more efficiently after continued revisions.

About 2% of urban employees’ monthly salary goes directly into the personal accounts while a major part of the contributions made by employers, usually between 4% and 10% of salary and varying among regions, goes to the public account. Funds in the public account are mainly used to reimburse inpatient costs for every person covered by the program. Money in the personal accounts can be used to pay for outpatient services and medicine costs.

This arrangement was designed to encourage people to join the program because many saw the personal accounts as personal savings for future medical needs, experts said. But problems with the system started appearing as the aging population and growing health-care demands drained the public accounts while leaving huge amounts in personal accounts that were untapped because of restrictions on spending. Meanwhile, people increasingly complained of limited coverage of costs for outpatient and chronic disease care.

The proposed revamp is set to address that issue. According to the draft plan, nearly half of the contributions that previously went into personal accounts will be shifted to the mutual account for public use. According to the draft plan, the change will not affect money already in people’s personal accounts. Meanwhile, coverage of people’s spending for outpatient services will be expanded, tapping the additional contributions to the public account.

Regulators said the goal of the restructuring is to spend the money more wisely to benefit the public in a broader way. But ordinary people are concerned that the changes will reduce their personal assets.

The National Healthcare Security Administration wrapped up a 10-day public comment period on the draft plan without providing a further update of the restructuring. Analysts said more efforts are needed to balance public and private interests and forge a consensus. In addition, an expanded public account and broader insurance coverage will also test regulators’ management capability.

Debates over the divided urban employee health insurance system have gone on for years. While some experts called for downsizing or even eliminating personal accounts, others said such a move might undermine personal property rights.

No consensus has yet been reached, but the need to make the system more efficient is increasingly prominent as the population ages.

Although the urban workers health insurance system steadily runs an annual surplus, growth in spending has gradually outpaced the rise in revenue. According to Yuan Tao, a professor at Guizhou University of Finance and Economics, the health insurance fund for urban employees recorded average annual growth of 17.8% between 2008 and 2018, but annual spending climbed an average of 19.2% during that period. It means the fund will run dry in 10 years, according to Yuan.

Established in 1998, China’s health insurance program for urban employees has focused on protecting people from runaway medical costs for diseases that require inpatient treatment or surgeries. The system has expanded in recent years to better cover critical diseases such as cancer but still left most common diseases uncovered.

According to Gu Xuefeng, a health-care policy expert at the National Health Commission, about 60% of the urban employees health insurance fund is spent on inpatient treatment with the remaining for outpatient and chronic disease treatments.

Such a system has encouraged excessive treatment as people often prefer to receive care that’s covered by the mutual account rather than spending money from their personal accounts, experts said. In 2019, nearly 19% of China’s urban employees who received medical treatment were hospitalized, compared with 10% in the rich-country block of the Organization for Economic Cooperation and Development, indicating a waste of medical resources.

China’s health authorities in 2016 set a plan to establish a health management system to help the public deal with chronic diseases by 2030 in a bid to improve public health.

To reach the goal requires more spending to improve insurance coverage for outpatient costs. But government coffers are already feeling the pinch as the economy slows and the fallout from the Covid-19 pandemic has forced Beijing to reduce companies’ social security contributions to bolster businesses. Thus, reorganizing funding sources and the spending structure became the most feasible option for regulators, experts said.

Redirecting contributions from personal accounts to expand coverage of outpatient costs will improve the efficiency of the health insurance fund, said Wang Zhen, a researcher at the Chinese Academy of Social Sciences.

A 1998 government document said personal accounts in the urban employee health insurance program belong to individual participants and can be inherited, indicating that the accounts are personal assets in which the government can’t intervene. However, such language was omitted from China’s first Social Security Law promulgated in 2010. Legal experts said that indicated lawmakers’ intention to lay the legal groundwork for an overhaul of the personal accounts.

One individual covered by the urban workers program said transferring part of personal-account contributions to the public account would amount to a de facto increase in individuals’ insurance costs. Such changes should be fully acknowledged by participants, and the use of the funds should also be made public, he said.

The draft plan adopted a compromised approach of retaining the personal accounts while reducing contributions to them. It didn’t elaborate on account ownership.

More spending will be allocated to cover urban employees’ outpatient costs for common and chronic disease treatments, offering reimbursement of at least 50% of spending. Local governments will decide the rate and coverage scope based on local conditions, according to the plan. In addition, the plan also proposed allowing insurance participants to use individual accounts to cover medical costs of direct relatives.

It is still unclear when the overhaul will be officially launched. Some experts said the 10-day public comment period was too short to fully address all the thorny issues and the discussion of the nature of personal accounts should not be avoided.

After the restructuring to reallocate funding between public and personal accounts, further efforts will be needed to decide the detailed coverage scope, reimbursement rates and how the changes connect with the existing system, said Yang Yansui, a public policy professor at Tsinghua University.

The draft plan said local authorities would make decisions on some of the key issues. But some local officials said it may involve issues beyond local management capacity.

The key of the overhaul is to improve the system’s efficiency even with limited resources, said one expert. That will test regulators’ ability to manage the insurance fund, Yang said.