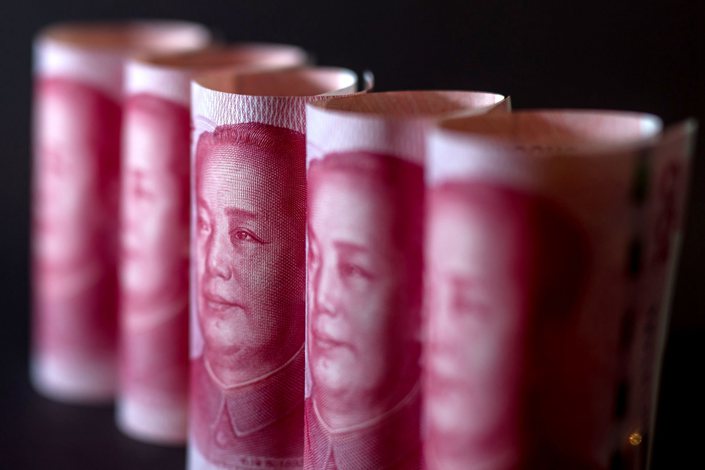 Chinese 100 yuan banknotes are arranged for a photograph in Hong Kong on Monday, April 15, 2019. Photo: Bloomberg

(Bloomberg) — China’s government has amassed trillions of yuan in unspent money, handing it fiscal firepower to stimulate an economic recovery that’s already leading the world’s rebound from the Covid-19 shock.

The government is selling a record amount of bonds this year to pay for stimulus, but it’s finding it hard to find projects that can be started quickly and also generate necessary returns. As a result, the deposits of all levels of government swelled to 4.8 trillion yuan ($710 billion) at the end of August.

“The funds will definitely be used,” according to Xing Zhaopeng, an economist at Australia and New Zealand Banking Group Ltd. in Shanghai. He estimates fiscal spending from September to December will accelerate, leading to a net injection of about 2 trillion yuan into the economy and financial markets.

Such spending would help the world’s second-largest economy continue expanding this year as it braces for a possible resurgence of the coronavirus outbreak and worsening ties with the U.S. Stronger growth in China also would help a global recovery as a robust domestic market would lead to more imports.

The OECD last week upgraded its forecast for the global economy to a 4.5% contraction this year, an improvement from an earlier estimate of it shrinking 6%.

The government plans to sell 3.75 trillion yuan of new special bonds to pay for infrastructure spending this year, yet as in previous years, it’s hard to find projects that can be started quickly and also generate necessary returns.

Once that money is spent it will support economic activity and increase liquidity in financial markets, helping banks which have struggled as the central bank pulls back on monetary stimulus.

Through the end of last week, government at all levels had sold 9.62 trillion yuan of bonds this year, according to data compiled by Bloomberg, and total planned sales are well above the level in 2019.

The January-August result was the fastest pace this year, though slower than in any month from 2016 through 2019.

There are signs that this is hurting the economy, with the pace of infrastructure investment moderating for a third straight month in August from a year earlier, according to calculations by Nomura Holdings Inc. based on official data. With the strength of exports possibly peaking and the recovery in consumption still weak, strong investment is crucial to the rebound continuing.