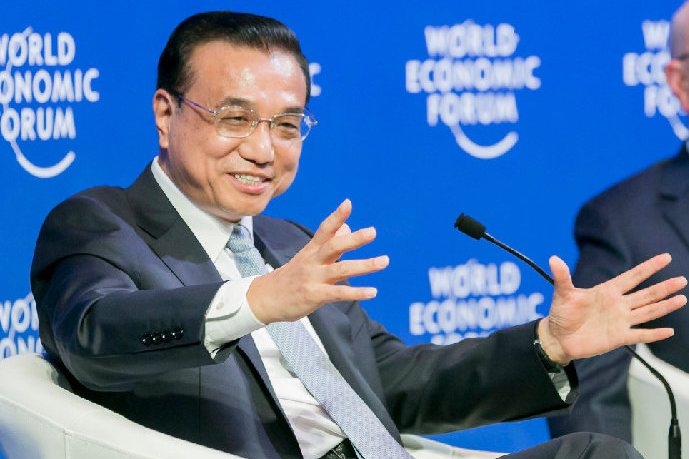 Premier Li Keqiang said Tuesday that China’s economy is set to grow this year despite fallout from the coronavirus pandemic, the Xinhua News Agency reported.

Li attributed the achievement to government policies to support tens of millions of micro, small and medium enterprises, as well as self-employed individuals across the country, who have borne the brunt of the epidemic.

Li made the remarks to more than 500 business leaders from across the globe at an online event hosted by the World Economic Forum, which Caixin attended.

China has become the first major economy to return to growth after the pandemic paralyzed the world, growing 3.2% year-on-year in the second quarter after a historic 6.8% contradiction over the first three months.

Data released Tuesday showed that China’s economic recovery has been gaining momentum. Retail sales in August grew for the first time this year and the country’s value-added industrial output accelerated at the fastest pace in eight months.

To meet its goals of maintaining stable employment and ensuring people can make a living, the Chinese government has “made it a top priority” to support the country’s more than 87 million self-employed individuals and 30 million micro, small and medium enterprises, Li said. For example, government-imposed tax and fee cuts are expected to save these companies and individuals more than 2.5 trillion yuan ($365 billion) this year.

In Li’s government work report in May, he said China would abandon the decades-old practice of setting an annual GDP growth target. Instead, it would prioritize stabilizing employment, alleviating poverty and preventing risks.

The premier also called for global efforts to contain the Covid-19 pandemic and revive the global economy. He emphasized the China’s role as concerns have mounted about global trade amid the ongoing dispute between major powers, such as China and the U.S.

Beijing has called the U.S.’ multibillion-dollar tariffs on China mistakes borne of “unilateralism and trade protectionism.” On Tuesday, the World Trade Organization ruled that some of the tariffs imposed by U.S. President Donald Trump’s administration had breached global trade rules.

The U.S. and Chinese tech industries are also going through a divorce as Washington moves to force TikTok’s Chinese owner ByteDance Ltd. to sell the popular app’s operations in the U.S.

“It would be neither wise nor practical to pursue technological or industrial decoupling” amid the damage caused by the coronavirus, Xinhua quoted Li as saying.

He added that China cannot develop in isolation from the rest of the world, and the world needs China to maintain development going forward.