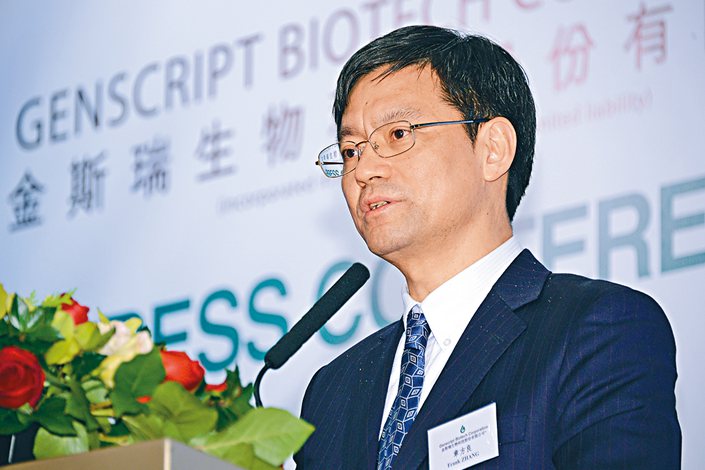 Shares of Nasdaq-listed blood cancer specialist Legend Biotech Corp. pared some of their losses after revelations early this week that the firm’s chief executive was detained in China sent the stock into free fall.

Legend said late Monday U.S. time that China’s Customs Anti-Smuggling Department had raided its office in Nanjing, and the premises of its majority shareholder GenScript there and in Zhenjiang. Five staff were detained.

One of those is GenScript chair and cofounder Frank Zhang, who became CEO of New Jersey-based, Johnson & Johnson-backed Legend last month. Legend was spun off GenScript to list in June.

“The inspections are in connection with what Legend Biotech understands to be an investigation relating to suspected violations of import and export regulations under the laws of the PRC,” the firm disclosed to the U.S. Securities and Exchange Commission.

Industry sources told Caixin the investigation is likely to be part of China’s ongoing crackdown on violations related to the use and export of “human genetic resources.”

Zhang, who remains chairman of both Legend and GenScript, is under “residential surveillance,” a kind of house arrest where under Chinese law he can be held for up to six months without charge.

The companies were singing from the same song sheet this week, with both saying their businesses were operating as normal.

Legend announced Monday it had appointed its Chief Financial Officer Ying Huang as interim CEO. Huang joined the company in June 2019 and helped engineer its blockbuster $424 million IPO in June.

Shares of Hong Kong-listed GenScript faced an emergency suspension on Friday, and fell more than 25% when they resumed trading Tuesday to a 20-month low, but have since pared about half of those losses to close at HK$12.14 ($1.56) on Wednesday. Shares of Legend followed a similar trajectory.

Legend pointed out authorities had not said Zhang’s detention was related to his roles at the company, and that no charges had been filed.

But the news has been closely watched in biotech circles, where it was seen as a sign China was stepping up enforcement of regulations enacted last year aimed at controlling the use and export of “human genetic resources.”

In July 2019, China’s Ministry of Science and Technology enacted new regulations that included export permits for any material classified as China’s “human genetic resources,” for uses such as international research collaborations.

The regulation also introduced a national security test for such exports.

Commenting on the new regulations when they were enacted, lawyers at Hogan Lovells said in a note: “While biotechnology research using Chinese human genetic resources is encouraged, what runs through the (regulations) is the strong emphasis on national security and public interest considerations as the driving force of permitted activities.”

“These are malleable concepts and are open to discretionary interpretation by the Chinese government. Foreign educational institutions, research institutions, and pharmaceutical companies whose research or clinical trials will involve the use of Chinese human genetic resources, are particularly affected by the (regulations).”

GenScript said last month that its profit grew by almost 50% to $78 million in the first half of the year, on revenue of $166 million. The Nanjing-based company, which was founded in 2002, listed in Hong Kong in 2015. It does business in 160 countries and is mainly focused on pharmaceutical research and development and cell therapies.