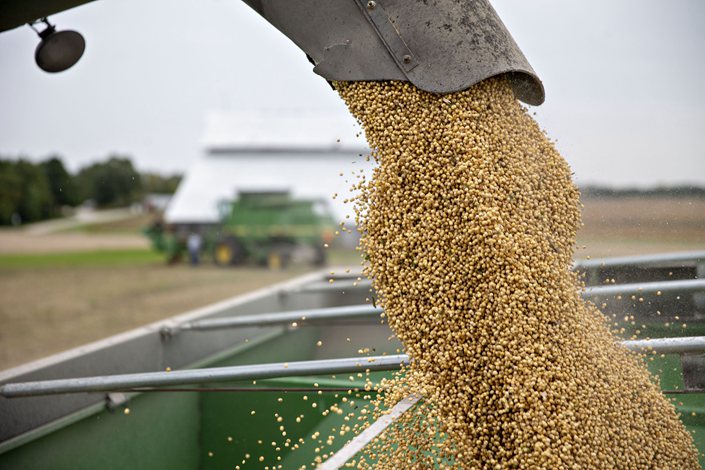 Soybeans are loaded into a grain cart during harvest in Wyanet, Illinois, U.S., on Tuesday, Sept. 18, 2018. Photo: Bloomberg

(Bloomberg) — The world’s largest agricultural commodity traders are making the most money in years exporting everything from soybeans to corn and wheat from American ports. And it’s mostly thanks to China.

The Asian nation has been on a buying spree, snapping up record amounts of American corn and holding at the start of the season the biggest soybean-import commitments for the time of year in almost three decades. The rush to guarantee loading space — at a time when a key Gulf Coast terminal owned by Archer-Daniels-Midland Co. is offline — is sending export margins soaring.

The fat profits are a turnaround for an industry that had got used to thin margins and lower exports due to President Donald Trump’s trade war with China, the world’s top buyer of soybeans. With China still pledging to meet its commitments under the phase one trade deal, ADM expects record U.S. exports of agricultural products in the fourth quarter, helping boost earnings for its traditional agricultural services unit that had struggled for years.

“The big export sales of corn and soybeans on the books, of which half or more are to China, along with an ADM export terminal being closed for repair until early 2021 have combined to push Gulf elevation margins to close to the highest levels in the last five years,” said Thomas Meierotto, a commodity risk manager at Chicago-based brokerage R.J. O’Brien & Associates LLC.

Agriculture traders measure export profits by looking at the price difference for crops loaded onto ships at Gulf ports and the cost of a barge delivered to New Orleans. The so-called elevation margins — which refer to elevators used to load the grain onto ships for export — for soybeans are at the highest since at least 2016, according to Bloomberg calculations using Commodity3 data, which puts profits at more than 60 cents a bushel. Traders estimate it at about 50 cents.

Export profits are, in some cases, higher than in 2016, when the U.S. shipped a record 36 million tons of soybeans to China. That’s because the Asian nation is also buying a lot of corn, which competes for space in terminals across the country. China is also counting on more U.S. soybeans since Brazil has run out, and on American corn with Ukraine set for a smaller harvest this season.

“Exporters are using about every facility available at the Gulf, including Texas, as well as Pacific Northwest, the Great Lakes and the East Coast,” said John C. Baize, an independent consultant who advises the U.S. Soybean Export Council. “In addition, the mid-river barge to ship transfer terminals are being used for corn and soybeans. All are operating at near full capacity.”

China’s buying spree has sent soybean futures rallying to pre-trade war levels of more than $10 a bushel in Chicago, while gains in corn were more modest with supplies ample after the coronavirus slashed demand for ethanol. Still, high prices have already started to cool China’s appetite, with the U.S. Department of Agriculture reporting smaller daily sales.

“The next few weeks are looking pretty favorable for the export window to get these crops from the fields into the river, but just the total volumes that we’ve seen here have been very supportive to prices,” Erin Fitzpatrick, an analyst at Rabobank in St. Louis, said in a webinar this week. “These current price levels appear to be kind of slowing some of the demand.”

ADM is positive on the performance of its agriculture services unit as volumes and margins progressively improve through the year, with the fourth quarter expected to be the strongest, Chief Financial Officer Ray Young said in a virtual event earlier this month. Agriculture giants including Cargill Inc. and Bunge Ltd. are also set to benefit, as are Andersons Inc., CHS Inc. and Gavilon, all of which have export capacity from the U.S.

“I look back at where the previous high watermark was and that was 36 million tons for the year back in marketing year 2026-17,” said Jim Sutter, USSEC’s CEO. “We seem to be setting ourselves up for a very similar year as that.”