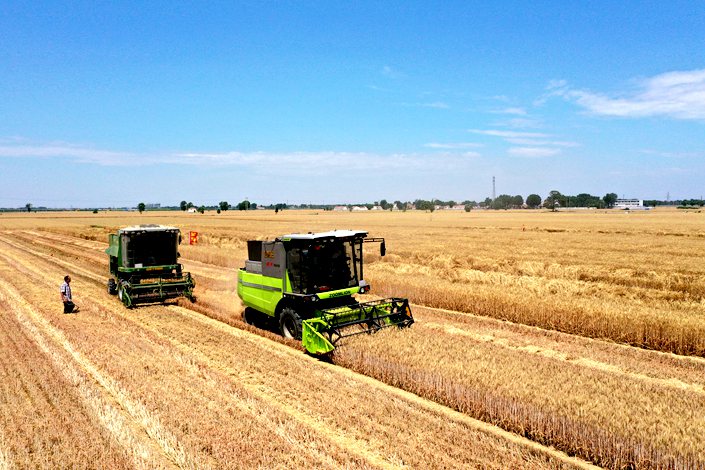 A farmer harvests wheat in Jiaozuo, Central China's Henan province, on May 29.

China’s farmers are keeping more of their wheat harvest this year rather than selling to the government and the market as they expect prices to rise and want to hold onto their stocks in case of shortages stemming from the severe summer flooding and fallout from the coronavirus pandemic.

Farmers in the country’s main wheat-growing regions sold 49.3 million tons of their crop for commercial use and to state reserves as of Aug. 31, 20% less than in the same period last year, according to government data (link in Chinese). Within that total, sales to the National Food and Strategic Reserves Administration, which stockpiles and manages the country’s strategic food reserves, sank by almost 70% to 6.2 million tons. Wheat purchased by market participants such as mills accounted for about 86% of the total in 2020, up from 70% last year, the official Xinhua News Agency reported (link in Chinese) on Aug. 14.

Public concern in China about food security has intensified this year amid the coronavirus pandemic and severe flooding that’s hit swathes of agricultural land since June. Speculation that shortages of basic foodstuffs like rice and wheat could emerge has sent prices soaring even as government officials have sought to reassure the population that the country is self-sufficient in staple crops and that the recent price fluctuations in the grain market are temporary.

“As state purchases of wheat dropped this year, market purchases accounted for a higher portion, increasingly becoming the main channel of wheat purchases,” Tang Ke, senior official at Ministry of Agriculture and Rural Affairs said at a press conference (link in Chinese) on Aug. 26.

Since 2006, the government has purchased wheat at annual state-set prices to ensure that any dramatic decline in market prices would not discourage farmers from cultivating the crop. When market prices are low, farmers can opt to sell more of their crop to state purchasers to support their income.

Market prices have risen sharply since July amid widespread flooding and an increase in the price of corn, which has prompted many farmers to switch to wheat to feed their animals, adding to demand for the grain. The Zhengzhou grain wholesale market, located in the major wheat-producing province of Henan in Central China, saw (link in Chinese) reported high-quality wheat prices were up 6.6% year-on-year in July.

With farmers expecting further price increases, they are less interested in selling now and are preferring to wait so that they can earn more money, multiple sources including farmers, grain traders, and heads of flour mills told Caixin.

However, some industry participants don’t expect prices to rise much further. One insider told Caixin that flour mills will find it difficult to accept further increases while Tang, the agriculture ministry official, said that pressure on wheat prices will moderate as the jump in corn costs gradually eases.

China had a record wheat harvest this summer, with output increasing by 756,000 tons year-on-year, or 0.6%, despite a 1.2% decline in planted acreage, according to data (link in Chinese) released in July by the National Bureau of Statistics.

Nevertheless, production in Henan, which accounts for nearly 30% (link in Chinese) of the country’s wheat output, may have declined due to natural disasters including a cold wave and drought which hit the southern part of the province earlier this year, several industry insiders said. Official data show that as of Aug. 5, the state purchased 9.1 million tons of wheat in the province, a year-on-year decline of 5.4 million tons, the biggest drop (link in Chinese) of all major wheat-growing regions.

“Previously, we could harvest at least over 2,700 kilograms per acre, but this year we only had about 2,120 kilograms,” a farmer in southern Henan told Caixin. One grain merchant in the area said he purchased less than 1,000 tons of wheat, half as much as in 2019, as many farmers saw declines in wheat production due to bad weather.