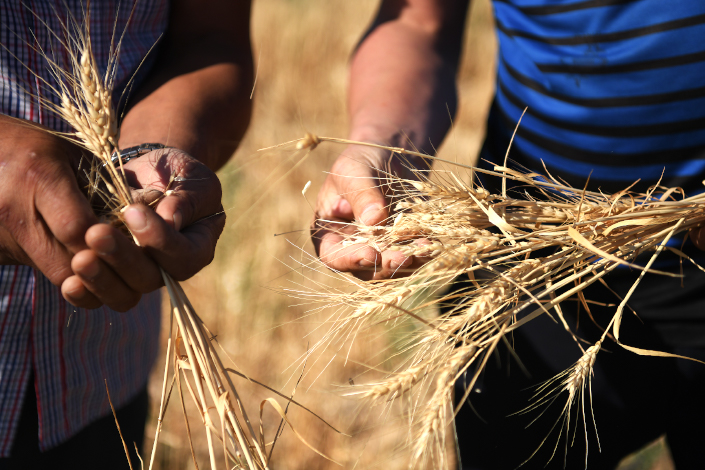 Farmers show their harvested wheat crop on July 21 in a field in the Xinjiang Uygur autonomous region.

Chinese farmers sold (link in Chinese) 42.9 million tons of wheat in the country’s major growing regions to the government and the market this year as of Aug. 5, 18% less than they did in the same period last year, as they stored more crops in anticipation of rising prices.

Since 2006, the Chinese government has purchased wheat at annual state-set prices to ensure that any potential dramatic drop in market prices would not discourage farmers from cultivating the crop.

Farmers have been more optimistic about wheat prices this year than last amid the Covid-19 pandemic, so they are willing to store more wheat for later sales at a higher price, and less interested in selling their summer harvest to state reserves and the market, said Chinese Academy of Social Sciences researcher Li Guoxiang.

Agricultural analyst Xu Xueping said that changes in weather, plus increasing pests and diseases, may have led to production declines in some wheat-producing regions. The price of corn, an alternative to wheat, has also risen, adding to upward pressure on the price of wheat.

A decline in wheat sales, however, is not necessarily an indication of incoming trouble for China.

The country’s summer grain output reached a record high of 142.8 million tons in 2020, a year-on-year increase of 0.9%. Wheat production increased by 756,000 tons, up 0.6% year-on-year despite planted acreage falling 1.2%, according to data (link in Chinese) released in July from the National Bureau of Statistics (NBS).

However, the world’s most populous country still faces growing pressure on its grain supply, as concerns over food security mount amid Covid-19 and the central government begins a campaign to combat food waste.

China’s grain production and consumption have long been in “a tight balance,” officials at the country’s top graft-fighting organization wrote (link in Chinese) Thursday. “Despite good harvests for years and food self-sufficiency at home, China’s grain consumption is still growing faster than its output,” they said.

Read more
In Depth: How to Avoid a Global Food Crisis From Covid-19

Meanwhile, China has been sourcing grain abroad, with imports rising significantly over the first half of 2020 as the country imported 3.4 million tons of wheat, an increase of over 90% year-on-year, customs data showed (link in Chinese).

This story has been corrected to reflect that Chinese farmers sold 42.9 million tons of wheat this year through Aug. 5, both to the government and on the market.