In Depth: How to Avoid a Global Food Crisis From Covid-19 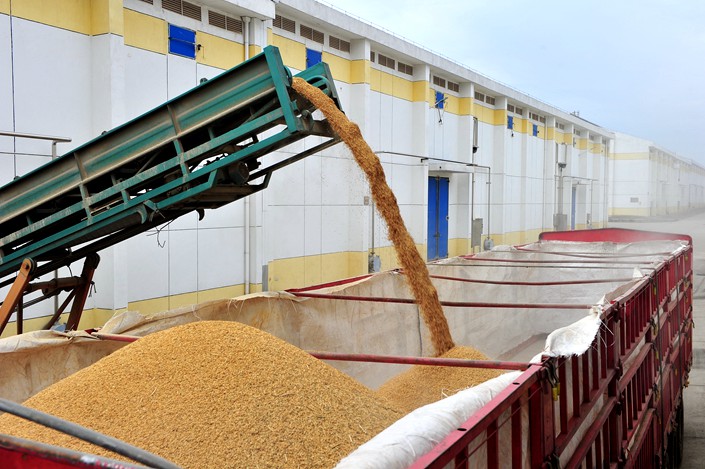 In New York City, the epicenter of the U.S. Covid-19 outbreak, Chinese student A Hui spent $60 to get his hands on a 15 pound bag of rice. Before the pandemic, which has infected more than 3.5 million people around the world, the price was half that amount.

A woman surnamed Liu, who lives in Paris, found that the price of tomatoes had risen from 2.49 euros ($2.72) a kilogram to 5.99 euros, while their origin had switched from Spain to France. Meanwhile, in Hong Kong in late March, as residents descended upon supermarkets, the list of items emptied from shelves grew beyond masks and toilet paper to include rice; there, hoarding was also afoot.

In early April, the price of “Thai 100B Grade Rice,” an international benchmark, rose by 20% to $595 a ton, a near-seven-year high, though it has since fallen to $570 a ton. In the U.S., the crop’s price has risen to $660 a ton, also a near-seven-year high. Vietnam, Cambodia, Myanmar, Kazakhstan and others have halted or curtailed exports. There are fears of a reoccurrence of the world food price crisis of 2007 to 2008.

But researchers say that, for now, hoarding and rising prices are a result of panic, which is controllable. World food reserves are at some of their highest levels in 15 years, so there aren’t the same shortages that were responsible for the crisis more than a decade ago. What’s more, they say, 2020 food production forecasts remain stable, adding that the key to preventing the situation from worsening lies in preventing panic from spreading while fending off protectionism, preventing speculation in the capital market, and avoiding a self-perpetuating, escalating cycle.

That’s not to say that the effects of the pandemic should be underestimated, however. If outbreaks further disturb logistics, production, harvests, and severely affect a country’s domestic and international food supplies, causing more turbulence in the market, they could further undermine the food security of the world’s most vulnerable people and regions.

According to data from the Food and Agriculture Organization (FAO) of the United Nations, at least one-fifth of the calories that Chinese people consume are imported, 50% more than four decades ago. While China grows more than 98% of its own food, it buys a lot of meat and seafood. When it comes to soybeans, a commodity oft-discussed in China-U.S. trade talks, China relies on imports for 80% of its supply. If the pandemic continues to worsen and erodes the surplus of food supplies around the world, a series of problems such as structural shortages and growth in prices would take place.

Still, from a caloric count, agricultural products affected by export bans account for only 1% of global trade. Most countries continue to ensure supply, while others are even seizing the opportunity to expand their markets.

A shadow over foodstuff

In late March, Wang Jia (pseudonym) looked worryingly at the empty shelves in a Hong Kong supermarket where rice should have been.

“These days Hongkongers are frightened easily,” she said. “They think of hoarding at the first rumor of purchase limits or export bans.”

According to Wang, on March 25, when news broke that Vietnam was halting rice exports, residents snatched up the grain, a quarter of which comes from the Southeast Asian country. More than 90% of the Hong Kong’s food is imported, and its people are especially sensitive to disturbances in global supply chains.

Vietnam’s prohibition is also related to hoarding. An official from Vietnam’s Ministry of Industry and Trade told local media that countries must increase their reserves in order to ensure their citizens’ livelihoods. Before cutting back, Vietnam’s rice exports in January and February reached 930,000 tons, a year-on-year increase of 32%.

“If rice exports continue to grow at this pace, supply may not meet demand in Vietnam,” the official said.

A resident of Ho Chi Minh City echoed Wang, saying that rice sold very quickly in supermarkets and that she had bought some 50 kilograms of rice, noodles and other supplies in recent days.

Vietnam is the world’s third largest exporter of rice, accounting for 15% of global rice exports, according to data from the U.S. Department of Agriculture (USDA). In its World Agricultural Production report published in early April, researchers lowered their forecast for Vietnam’s rice output for 2020 by 3.3% to 27.4 million tons due to potential droughts and saltwater intrusion.

India supplies 22% of the world’s exports, more than any other nation. With the entire country on lockdown, domestic logistics have suffered and labor shortages have appeared in factories, ports, and elsewhere.

As a result, rice exports have stagnated. In some cases, companies have been unable to fulfill preexisting orders and even provide up-to-date prices. On Monday, the Indian government extended its lockdown, which was set to end Sunday, to May 17. However, in an April 16 interview with Reuters, B.V. Krishna Rao, president of the country’s Rice Exporters Association (REA) said export operations had resumed and that suppliers were signing new contracts.

Barriers to trade and hoarding have caused global prices to rise for at least three consecutive months. Compared with corn, wheat and soybean, rice has a small international trade volume; only 10% of what’s produced is traded internationally. This relatively low volume increases the market’s sensitivity to changes.

A report on the international cereal market also published in April by the USDA estimated that global exports of rice in 2020 would decline by 2% to slightly below 43 million tons, a near-four-year low.

Some countries that export wheat have also restricted exports of the commodity. Russia, Ukraine and Kazakhstan have implemented quotas on exports. According to the report, the world’s main wheat exporters raised their prices in March, fueled by both restrictions and demand for greater stockpiles.

Yet the scope of the wheat trade is much larger than that of rice. Therefore, if one country restricts exports, it is much easier to find an alternative source. The report said that there is ample supply in wheat products, and that Europe’s larger and more competitive exports offset the effects of Russia’s cutbacks.

The tense atmosphere in the food market has drawn the attention of the FAO, other international organizations and governments, but many agricultural economists say the current situation has many differences with the 2006 to 2008 food crisis.

“The stocks-to-use ratio of rice, corn and wheat are all very high. They’re the highest levels in almost 15 years,” according to David Dawe, senior food systems economist at the FAO Regional Office for Asia and the Pacific.

The stocks-to-use ratio compares how much of a particular foodstuff is stored at the end of an annual period with the amount that is expected to be consumed during the next period. A ratio of 17% to 18% indicates a safe supply. According to FAO calculations, the ratios for rice, corn and wheat clock in at 35%, 30% and 36% respectively.

What’s more, the USDA expects a global bumper harvest during the 2019 to 2020 period, although the FAO forecasts that disruptions to food supply chains may emerge in April or May.

According to agricultural economists, the FAO and other international organizations, the most vital task at hand is eliminating panic and protectionism among various countries. Maintaining an open market will mean relatively few food supply problems, they say.