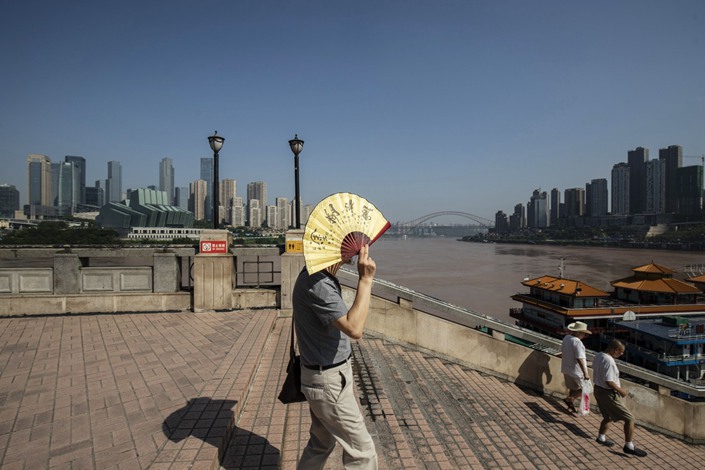 A pedestrian uses a folding fan to shield from the sun as he walks through a square overlooking the Chaotianmen docks in Chongqing on July 28, 2020. Photo: Bloomberg

That’s the assessment from the earliest available indicators, which showed China’s recovery is losing pace. The aggregate index combining eight indicators tracked by Bloomberg this month slipped into contraction, compared to accelerated expansion in August.

China has staged an uneven recovery, initially driven by strong industrial output yet with recent data showing signs that consumption has started to catch up. A strong and broad spurt in spending is needed for a more meaningful economic rebound.

The pace of economic expansion moderated marginally for small businesses in September, despite continued recovery, according to Standard Chartered PLC, which surveys more than 500 smaller firms each month. The growth momentum indicator eased from a month ago and the “current performance” reading retreated for the first time since March.

“This suggests that the recovery continued uninterrupted, despite signs that the V-shaped rebound is losing momentum,” according to economists Shen Lan and Ding Shuang, who published the results. “SMEs’ new orders slowed in September” and the pace of expansion of banks’ credit to SMEs also eased, they said.

Exports for smaller businesses remained resilient, according to Standard Chartered, with export-oriented SMEs performing better than domestically focused ones in the month.

The outlook for global trade remains more encouraging, with Korean exports in the first 20 days of September up 3.6% from a year earlier, the first rise in early trade data since March. Average daily shipments from South Korea, however, offered a less optimistic picture, falling by 9.8% as the period had two more working days compared with last year.

South Korea’s exports serve as a barometer of global trade as its companies are closely linked to global manufacturing-supply chains, and it releases data quickly.