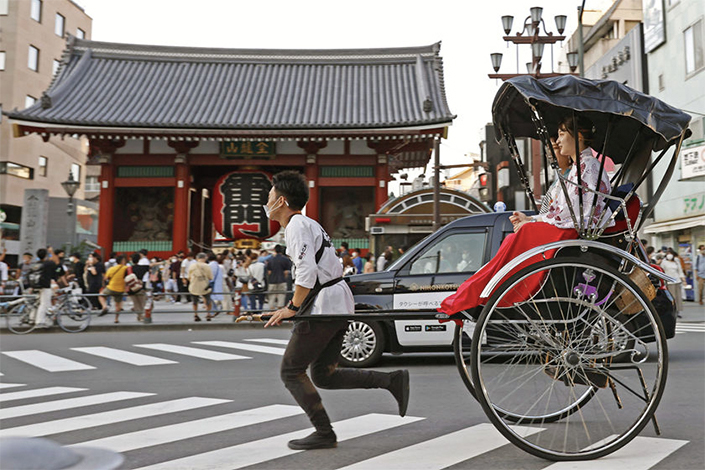 Visitors in traditional Japanese costumes take a ride on a rickshaw in Tokyo, Japan, on Sept. 21.

(Nikkei Asian Review) — Japan plans to gradually lift overseas travel alerts in October in a bid to spur the removal of entry restrictions implemented in other countries, Nikkei has learned.

The government will give priority to 10 countries and regions that have a low number of new coronavirus infections, including Australia, New Zealand, and Vietnam. But decisions on whether to accept travelers from Japan will ultimately be up to those governments.

Japan has issued Covid-19 related travel advice and warnings on infectious diseases via a system which has four categories depending on the potential risk and safety in relevant locales. Each warning level does not legally bind Japanese citizens from traveling, though the receiving country has the power to accept or reject their entry.

As of Monday, Japan has placed 159 countries and regions, including China and the U.S., at level “3,” which urges Japanese nationals to avoid traveling to those areas for any reason.

Beginning next month, Japan will lower its warning level to “2” for countries with few infections as a proportion of the total population in the last two weeks. Level 2 advises Japanese nationals to avoid nonessential travel. Australia, Vietnam, New Zealand, Brunei, and Belgium will likely be included on the list. A two-week quarantine, however, will be required upon return to Japan.

It will mark the first time for Japan to lower its warning advisory amid the pandemic. As of Monday, 109 countries and regions have restrictions on entry of travelers from Japan. Some of those countries have implemented their entry bans in response to Japan's travel warning. The government thus aims to lift its warning to prompt those countries and regions to ease their restrictions to resume mutual economic activity.

Meanwhile, Japan also is advancing negotiations with 16 countries and regions including China, Vietnam, and Taiwan to resume business travel. The government easing its travel warning could also aid in reaching agreements in those negotiations.

Starting on Oct. 1, the government will allow the entry of foreigners with permission to stay in the country for more than three months. The easing could also cause other countries to begin accepting travelers from Japan.