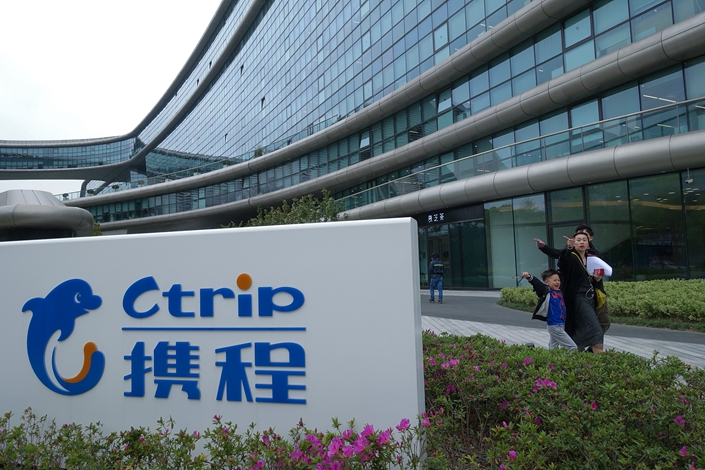 Ctrip’s headquarters in Shanghai in April 2018.

Leading online travel agent Trip.com Group Ltd. said on Tuesday the central bank has approved its application to acquire a Shanghai-based online payments company, making it the latest of China’s internet majors to seek such a license.

In a brief statement on the deal, Trip.com said it hopes its acquisition of the company, which operates the occard.com.cn website, will help to stimulate demand by boosting convenience for consumers during the current dramatic travel slowdown. No terms for the purchase were disclosed.

The Shanghai-based license holder, whose Chinese name is Dongfang Huirong (东方汇融), was founded in 2011 and received its payment license a year later. At the time, China’s central bank had just begun experimenting with such licenses in a bid to liberalize the country’s financial services system that was controlled almost exclusively by traditional, slow-moving state-run banks at that time.

Many of those earlier licensees have either closed shop or evolved into niche players as the space became dominated by the duopoly of Alipay, centerpiece of the company Ant Group Co. Ltd. that is preparing an IPO that could become the world’s largest; and the payments service tied to Tencent’s popular WeChat instant messaging platform.

After issuing several dozen licenses, the central bank said in 2016 that it would not be issuing any more. That has made existing licensees attractive targets for a recent flurry of acquisitions now taking place by a new wave of internet majors that have only reached their current size in the last few years.

Trip.com already offers a range of other financial services through its own licenses and with partners, including virtual banking, microlending, consumer finance and insurance. The latest purchase will provide a final key piece to a chain allowing Trip.com to provide end-to-end services from searching and booking flights and hotels to paying for those items.

Its new acquisition comes as the global travel industry suffers huge impact from a slowdown during the global pandemic. Trip.com’s revenue tumbled 64% year-on-year in this year’s second quarter, with its four major businesses of hotel reservations, transportation ticketing, packaged tours and corporate travel all falling, the company reported it its latest earnings report last week. Of its four major revenue sources, its packaged tours business was hit hardest, falling 88% year-on-year for the quarter.