Trending in China: The View from China on U.S. Presidential Election Debate Antics 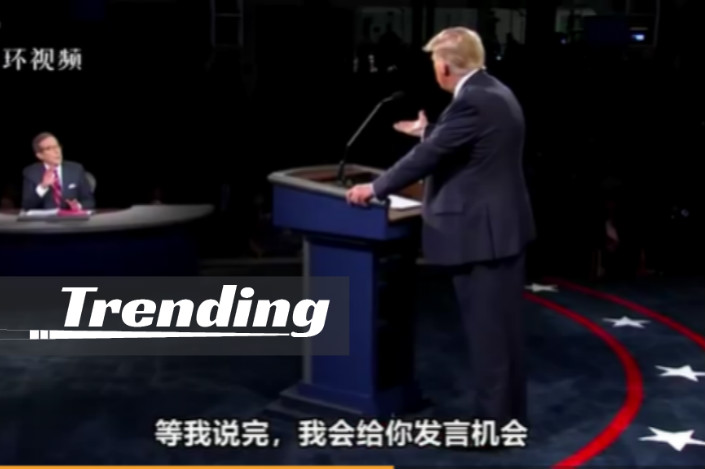 As the world watched the first of three U.S. presidential debates, this one in Cleveland Ohio, China took its place on the sofa. Chinese netizens shared bemusement at President Donald Trump’s taunts of Democratic contender Joe Biden’s oversized facemask and pity for the moderator’s inability to control the torrid discussion, as seen in popular blogs and comments on social media platform Weibo. Meanwhile on Twitter, commentators imagined China’s leaders in Zhongnanhai, Beijing enjoying these scenes of chaos and ill-tempered talk during the major rivals’ possible transition of power.

As President Trump set out his now standard blame on China for the coronavirus outbreak in America, Biden reminded him that early in the crisis Trump had praised China for its openness regarding the course of the novel coronavirus. President Trump went on to accuse Mr. Biden’s son of doing business in China, saying he “takes out billions of dollars [and] makes millions of dollars [from China],” without factual evidence. However, China was not the main focus of the debate, which zoomed in on healthcare, Covid-19, and the Supreme Court, in the brief instances where policy made itself heard above the fray.

Most comment online was reserved for ordinary watchers of the debate as Chinese officials did not make public mention of the debate. Global Times editor Hu Xijin took to Twitter to state that the debate did not “show an exemplary role to American people on how to engage in debates.”

Many Chinese social media users commented on Fox News’ Chris Wallace who moderated with moderate success, being forced to make clear, “Mr. President, I am the moderator of this debate” at one point. “Trump will blow hot wind on anyone in his way”, said one watcher on Weibo.

As for who had won the debate, it may all come down to qi or essential energy for Chinese viewers. As one blogger wrote, “Despite paying no heed to facts and policies, Trump is… full of temper, and seems more like a 30-year-old guy, while Biden is a gentleman, fair and reasonable, rarely interrupting, but more someone who is nearly 80 years old. The host, Wallace, doesn’t have it easy.”

“Trump is little more than a hooligan who has mastered the essence of swearing on the street and quarreling in kindergarten. Is the debate won by whoever is loudest and fastest?”

A key take-away in China appears to be that “rules are not very important with debates.”

Related: With No Military Alliances, China Is No U.S.S.R., Former Chinese Envoy in U.S. Says