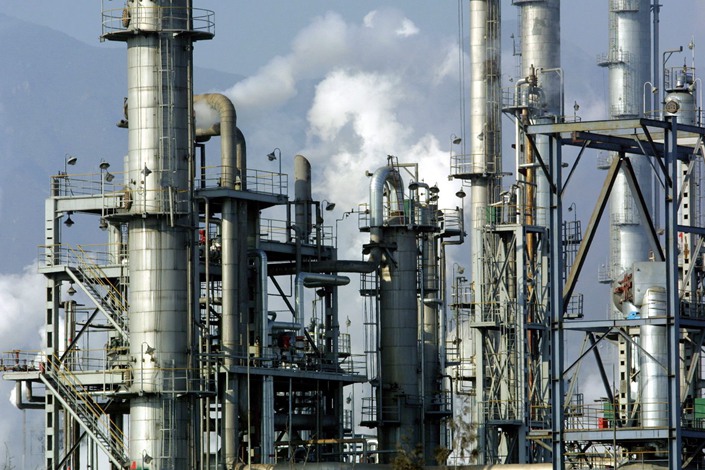 Steam rises from the China Petroleum and Chemical Corp. (Sinopec) oil refinery on the outskirts of Beijing on Jan. 17, 2003. Photo: Bloomberg

(Bloomberg) — China is investing tens of billions of dollars in new mega-refineries even as its fuel demand is expected to peak within five years, raising the risk it will flood the region with cheap exports.

At least four projects with about 1.4 million barrels a day of crude-processing capacity, more than all refineries in the U.K. combined, are under construction. That’s after the country already added 1 million barrels since the start of 2019. All that capacity will add more petroleum products and plastics just as China National Petroleum Corp. sees fuel demand peaking in 2025 as electric vehicles sap consumption.

The mismatched building boom underscores how rapidly clean energy and electric vehicles are changing the industrial landscape in China, especially after President Xi Jinping’s pledge last month to go carbon neutral by 2060. It also positions the country to be an even bigger exporter of fuel, endangering refinery operations from South Korea to Australia to Europe.

“China is increasingly in a position to take market share globally as it continues to expand refining capacity while its own demand growth is slowing,” said Michal Meidan, director of China at the Oxford Institute for Energy Studies.

Chinese refining capacity has nearly tripled since the turn of the millennium as the country’s oil giants tried to keep pace with the rapid growth of diesel and gasoline consumption.

There’s now more fuel production than the country needs, leading to exports of nearly 1 million barrels a day, close to the volumes shipped by South Korea and India, according to IHS Markit.

Domestic demand is likely to grow more slowly in the future as the country begins its long transition toward carbon neutrality. Even before Xi announced the 2060 target, China National Petroleum Corp. said it expected refined products demand to grow by just 0.9% a year through 2025 and peak around then, compared to 5.6% average annual growth from 2000 to 2019.

To be sure, China’s vehicle sales have increased for two months — the first market to rebound since the pandemic — and gasoline- and diesel-guzzlers still make up the vast majority of that. Still, CNPC researchers said they expect electric vehicles and alternative fuels such as hydrogen and ethanol to displace increasing amounts of petroleum fuel.

The new mega-refineries under construction in places like Zhejiang, Jiangsu and Shandong will be geared toward turning crude oil directly into petrochemicals and plastics. That’s particularly bad news for plants in Taiwan and South Korea designed to cater to the Chinese mainland’s petrochemical market, said Harry Liu, executive director for oil markets, midstream and downstream at IHS Markit.

While their plastics emphasis means the new plants will produce less transport fuel on a relative basis than older plants, the supply of petroleum products will have to be sold somewhere. In the future, Chinese refiners could export fuels as far afield as Australia, Europe or even the U.S., according to traders in the region.

Those exports will eat into market share of existing refineries, potentially causing smaller plants within China, as well as others from Japan to Australia, to shutter permanently.

“Refinery closures will come in several forms,” said Sushant Gupta, an analyst with Wood Mackenzie Ltd. in Singapore. “It does not makes sense now to operate a standalone refinery or a standalone petrochemicals plant for that matter. Standalone assets will be first challenged in any lower margin environment.”