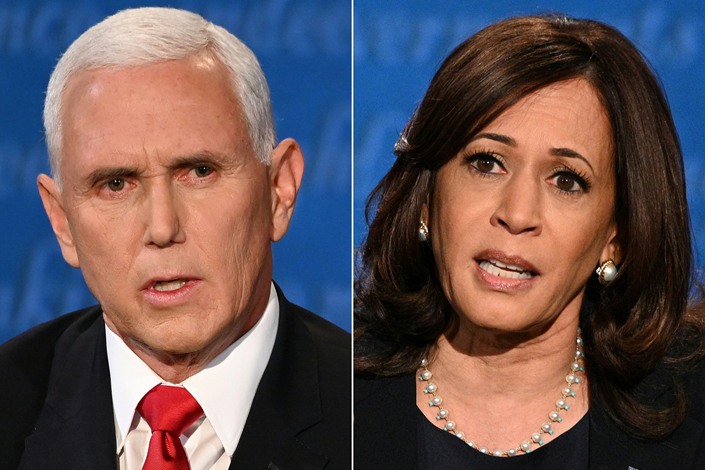 U.S. Vice President Mike Pence and Senator Kamala Harris clashed over China policy in a face-to-face debate Wednesday, focusing on trade disputes and the pandemic, setting the stage for the second presidential debate scheduled for Oct. 15.

The vice presidential debate came as more than 30 people, including Trump, have been confirmed infected by an outbreak of the new coronavirus at the White House that first emerged early last week.

The president was released from the hospital Monday after receiving treatment. Biden has expressed that he would refuse to participate in the next debate if Trump is still infected.

At Wednesday’s debate in Salt Lake City, when asked by the moderator about the U.S.-China relationship, Harris said: “The Trump administration’s perspective and approach to China has resulted in the loss of American lives, American jobs and America’s standing.”

The 55-year-old senator criticized the Trump team over the disbanding of a pandemic monitoring task force established by the former President Barack Obama. ”That [task force] basically was responsible for monitoring pandemics. They got rid of it,” Harris said.

“There was a team of disease experts that President Obama and Vice President Biden dispatched to China to monitor what is now predictable and what might happen. They pulled them out,” she said.

As of Thursday, the U.S. has reported 7.58 million Covid-19 cases and more than 210,000 deaths, according to Johns Hopkins University’s coronavirus resource center.

Pence defended the incumbent by blaming China over its handling of the outbreak and accusing Biden of opposing Trump’s decision to suspend travel from China. “He [Biden] said it was hysterical,” Pence said.

The U.S. closed its consulate in Wuhan, the epicenter city of the outbreak in China’s Central Hubei province, after the Chinese foreign ministry notified the U.S. on Jan. 3 about the disease. In early February, Washington imposed restrictions on entry into the U.S. from China.

Harris also charged that the U.S. has “lost that trade war” initiated by the Trump administration in July 2018.

On Jan. 15, the U.S. and China signed a phase one trade deal after a nearly two-year tit-for-tat trade war, in which Beijing pledged to purchase more American agricultural, energy and manufactured goods and address some U.S. concerns over intellectual property practices. According to the Washington-based Peterson Institute for International Economics, China had purchased about half of the deal’s year-to-date targets in the first eight months this year.