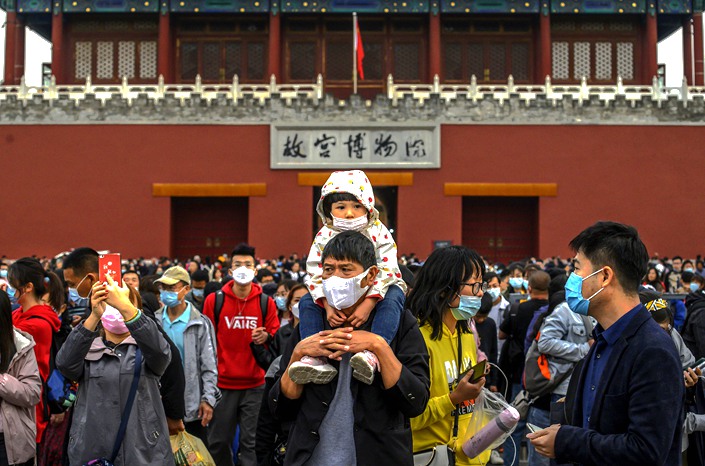 A group of Chinese tourists walk outside the Forbidden City in Beijing on Tuesday.

More than half a billion Chinese took to the road during this year’s weeklong National Day holiday, as travel began to approach pre-pandemic levels over the first major holiday since Covid-19 had been largely contained in the country.

The eight-day holiday saw some 637 million trips nationwide, 79% as many as last year, which the state-affiliated China Tourism Academy (CTA) hailed as a signal of confidence that the people are returning to their pre-coronavirus lifestyles.

“Though still deeply negative in year-over-year term, the National Day Golden Week data mark a significant improvement from the holiday data of previous months,” financial services firm Nomura Holdings said in a research report, adding that China’s economic performance is still held back by a mix of factors, including remaining social distancing rules.

China kicked off its Golden Week holiday on Oct. 1, the anniversary of the founding of the People’s Republic of China in 1949. This year it coincided with the traditional mid-Autumn festival, extending the usual weeklong holiday to eight days.

Tourism-related consumption bounced back over the holiday, as people who spent much of the year cooped up at home took advantage of the opportunity to travel. Domestic tourism-related businesses brought in 466.56 billion yuan over the holiday, down about 30% from the previous year, but a major improvement from the 60% drop over the Labor Day holiday in May.

The South China province of Guangdong was the most popular travel destination, and Hubei province, where Covid-19 first broke out, was ranked 10th with about two-thirds as many inbound tourists as in the previous year, according to the CTA. Southwestern Yunnan province, a normally popular tourist destination, fell in the rankings with a 70% drop in ticket bookings after it recorded a handful of new imported cases in September.

With people of certain occupations still limited by interprovincial travel restrictions — including students, teachers and public servants — only 29.1% of tourists surveyed by the CTA chose to travel across provincial borders.

The promising domestic travel figures were “biased up by the fact that people can’t travel abroad” and needs to be viewed through the lens of the global pandemic, according to analysts from the Australian investment bank Macquarie Group Ltd.

“There is undoubtedly a risk in allowing mass tourism to resume and, in some ways, this is an early exercise in what the rest of the world will have to go through as global travel restarts next year,” said Nicholas Thomas, associate professor in health security at the City University of Hong Kong.